Junior Executive for the Weyland-Yutani Corporation

Carter J. Burke is the secondary antagonist of the 1986 film Aliens.

Burke is a junior executive of the Weyland-Yutani corporation, who wishes to strike rich on weaponizing the Xenomorphs, by any means necessary. However, he approaches his plans through very cruel means, as Burke's actions indirectly caused the deaths of several LV-426 colonizers, and would later cause several deaths of the Colonial Marines on the USS Sulaco. Burke has also manipulated his way into getting what he wanted, having not a care of empathy for anyone but his superiors.

He was portrayed by Paul Reiser.

Carter Burke was a corporate executive who often comforted Ellen Ripley and became her friend while she was at Gateway Station. After revealing that Ripley had been frozen for fifty-seven years, and that her daughter passed away two years earlier. After learning of The Derelict ship from Ripley, he agrees to help regain her license in return for her returning to LV-426 to investigate. Burke later had an opposing voice to the actions of the survivors keeping to The Company's interests as well as his own. Burke paid the ultimate price for his acquisitive greed on the fateful mission to the colony.

Initially portrayed as a levelheaded and competent executive who is able to handle stressful predicament in which is seemingly plunged into, Carter Burke was revealed to be a selfish, deceitful, and manipulative sociopath, caring only for his own needs on the investigation mission. He manipulated Ripley into giving him the coordinates to the Derelict on LV-426 while playing the empathetic friend for her. Burke also had no issues ordering the colony to investigate the signal leading to their deaths, as well as trying to impregnate Ripley and Newt with Xenomorphs and sabotaging the cryotubes of the other survivors to cover his tracks. Although considered ruthless, even by his colleagues at Weyland-Yutani, they lamented that Burke was "executive material".

Carter Burke worked for the Weyland-Yutani corporation in 2179. He was the first person to acquaint himself with Warrant Officer Ripley after her 57 years in hypersleep. Burke filled Ripley in on the years she missed out on and the fate of her daughter Amanda Ripley-McClaren. Burke befriended Ripley on her stay at Gateway Station and was a familiar and friendly face to Ripley. After Ripley was demoted to Lieutenant, Burke came to her apartment with an offer to reinstate her Warrant Officer rank on accompanying Burke and a squad of Marines to investigate the loss of contact with Hadley's Hope, which was colonized on the moon Ripley and the crew of the USCSS Nostromo landed on decades before.

Carter was one of the civilian advisors on the mission along with Ripley, presumably to safeguard the company's investment in the terraforming colony. Carter joins the marines when they go planet side and stays either near Lt. Gorman or in the APC while the marines search the colony and deem specific points safe. Burke sides with Ripley against Gorman when she points out that the marines' weapons could rupture the station's cooling system, explaining that the station is basically a big fusion reactor, and they could trigger a thermonuclear explosion. He witnesses the marines being slaughtered by the Xenomorphs via the APC. Only Corporal Dwayne Hicks, and Privates Hudson and Vasquez survive the assault due to Ripley taking control and rescuing the the survivors.

However, when Ripley suggests they take off and nuke the site from orbit, Burke says he cannot authorize that kind of action (first sign of foreshadowing that he has another agenda), and the site has a substantial dollar value attached to it. He also reasons, against Ripley and Vasquez that the Aliens are an important species and they don't have the right to exterminate them. Ripley then points out the operation is under military jurisdiction and Dwayne Hicks is next in chain of command (Gorman is unconscious at this point). Burke then reasons that Hicks cannot make that kind of decision as the site is a multi-million dollar installation. Hicks then orders immediate evacuation, planning to nuke the planet from orbit.

Burke would betray Ripley and the Marines, as a captured alien would have great potential for research and bioweapons, which would earn him a lucrative promotion - he specifically targets Ripley for this, after she discovers his intention. He planned to smuggle the alien past quarantine through Ripley and Newt.

He attempts to get them impregnated by locking them in a room with a pair of face huggers; he later turns off the room's security camera. He would then sabotage the cryochambers in order to kill the marines, but his plan was foiled after Ripley triggered the smoke detector and the Marines rescued her. She then exposed Burke. The Marines planned to kill Burke after they realized that the aliens were approaching the medlabs.

In the chaos, Burke escapes and seals himself off from the pursuing marines. Although he believed he escaped, Burke was suddenly ambushed by a Xenomorph from behind. The Xenomorph swiftly killed him while Burke watched in terror, avenging the murder of the fallen Marines and the 157 colonists of LV-426.

In a deleted scene from Aliens, Burke survives the Xenomorph attack and is instead captured and impregnated by the Xenomorphs in their hive. Although he senses a Chestburster inside his stomach, Ripley encounters him and instead of allowing the Xenomorphs to kill him, she leaves Burke's fate to a grenade blast. 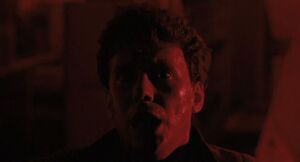 Carter J. Burke's last moments before being killed by a Warrior Alien Xenomorph.