Owner of the Pewterschmidt Industries

Tormenting Peter and other people.

Maximize profits for himself (succeeded).

Drive a wedge between Peter and Lois (failed).

Carter Pewterschmidt is the main antagonist (sometimes an anti-hero) of the adult animated series Family Guy.

He is a wealthy industrialist who is the owner of U.S. Steel and Pewterschmidt Industries and father of Lois Griffin, Carol Pewterschmidt-West and Patrick Pewterschmidt, father-in-law of Peter Griffin, grandfather of Meg Griffin, Chris Griffin and Stewie Griffin, husband of Barbara Pewterschmidt, and the arch-nemesis of both Peter and his pet dog and best friend Brian H. Griffin.

He is gleefully cruel, heartless, manipulative and sadistic - particularly towards Peter and is shown to keep a Rancor in a pit below his house. To him having money is the secret to happiness although he briefly reconsiders this when he briefly becomes penniless and Peter helps rebuild his fortune. He hates Peter and offered him $1,000,000 if he didn't marry Lois. In the 19th century his family owned Peter's ancestor Nate Griffin as a slave. He is good friends with Michael Eisner, Ted Turner, and Bill Gates, playing poker with them regularly. He has owned CNN via a poker game and following his remarriage to Barbara who had married Turner briefly following a lawsuit that left Carter poor. He used to own a race-winning greyhound named Seabreeze. However, she became pregnant with Turner's babies but the father wasn't known until after the birth. When this was realized, he disowned her. Recently, Carter has shown signs of leniency towards Peter, going so far as to say "You're alright, Griffin".

After losing the lawsuit, Carter loses his money, his wife, and his lifestyle, and goes to kill Peter at his doorstep, but instead starts to live with his daughter. Peter then tries to make Carter feel better by showing the life of an average American. Afterwards Barbara returns and tells Carter they are rich again. Peter thinks that he would get a share of wealth only for Carter to abandon their friendship and tells Peter to go to hell. He then leaves with his wife, leaving Peter and the others poor as they were. Lois tells Peter that Carter had offered them $1,000,000 as a wedding present but she turned it down, giving Peter thoughts of murdering her as she explains her view of happiness.

Despite the fact that Carter often locks horns with Peter, he treats Meg, Chris and Stewie well as his grandchildren, even offering to help out when Lois appealed to her father to use his influence to get Chris admitted to a private boarding school in "No Chris Left Behind". His own children are treated a little less kindly at times. Although he uses endearments like "pumpkin" with Lois, he refused to pay a ransom to free her from kidnappers in "Let's Go to the Hop". His son Patrick was locked into a mental institution and he refuses to discuss the matter with his Daughters. He also notes that his youngest daughter Carol has "weird boobs" in "Brothers & Sisters".

In "Ocean's Three and a Half", it is revealed he owns an iPod and enjoys rubbing it in Bill Gates's face. He also has a high tech vault in which he stores his, and sometimes others', money. The times the vault is at its richest is when Carter hosts his gala. It has four Locks: A combination lock, foiled by Reese Witherspoon's chin, Voice Identifier, foiled by Cleveland Brown's impressionism skills, Penile Identifier, broken by Glenn Quagmire's penis, and a question: "What is the least appealing male first name?". The question was answered by Peter with the name "Keith".

In "420", he loses money from the timber industry due to the legalization of marijuana, so he first teams up with Peter on a smear campaign, but only after he has his men violently beat Peter up. When that fails, he bribes Brian to support the re-illegalization of marijuana by publishing Brian's Faster Than the Speed of Love. It is unknown how the book's failure affected him. It is revealed that he had sold his Bangles records, halting his project on learning the song lyrics. We also find out that he has a liking for Diet Rites, and keeps a whole stack of them in his car.

In episodes such as "Bill and Peter's Bogus Journey" and "You May Now Kiss the...Uh...Guy Who Receives", it is made clear that Barbara and Carter married because Carter was rich. However, in "Welcome Back, Carter", it is revealed that Barbra and Carter had fallen in love before they married. It is also revealed that Carter is a war veteran, and he and Barbara exchanged letters, and when that ceased, Carter was presumed dead. At a party Barbara and her new fiancé Roginald attended, he crashed it, and the two reaffirmed their love, sealed by a marriage proposal. However, in the latter episode, Carter was caught in an affair, and though Barbara demanded a divorce, the two are still living in the same household. It is also hinted in the same story that he abused Lois as a child, as when he is woken up by Barbara he mumbles that he is just taking Lois' temperature.

The Pewterschmidt family considered retirement after Carter fell asleep behind the wheel of their car in "Grumpy Old Man". Carter soon became bored and listless, needing to be returned to his office at Pewterschmidt Industries to recover.

Portraits of Babs and Carter hang in Peter and Lois' bedroom, notably in "Family Guy Viewer Mail No. 2".

In "The Old Man and the Big 'C", Carter was told by his doctor that he is dying of terminal cancer, which is overheard by Brian. He returns and tells Stewie who confirms it via online camera in the Pewterschmidt house. Brian tells Lois who rounds up the family and heads for her parent's home, but when they arrive they find Carter in good health and Brian loses his credibility.

Brian and Stewie eventually find out that Carter had and kept the cure for cancer a secret since 1999 after they try to find evidence that the Carter they saw was an imposter. He did it so people would spend more money on treating cancer rather than curing it. He then kicks them both out of the lab, unaware that Stewie swiped the cure. Brian is about to tell about the cure to the family only for Peter to interrupt him to show him his false attempt of doing a somersault, delaying enough time for Carter and a group of men to claim the cure from Brian. Brian then tells Lois what Carter did and is doing before Carter does anything else. Lois is appalled but Carter refuses to show pity until she brings up some of his closest loved ones possibly dying of cancer and he 'promises' to reveal the cure.

However, he crosses the Moral Event Horizon by going back on his word and releases an edible brand of deodorant for the developmentally disabled called "Slow Stick" instead, with tis enraging the Griffins. Lois calls Carter to find out why he didn't reveal the secret whilst being disappointed and in tears, only for Carter to blow her off with the fact that he lied. In the end, Carter puts himself on the front of a magazine with the quote "Carter, you devil!", tricking Peter and Lois into forgiving him, whilst Brian still and might never forgive him. This has shown to be Carter's most selfish, monstrous, and devilish act since he is now responsible for millions of deaths via cancer and millions to come in the Family Guy Universe, only thinking about/caring for profit and himself to the point of only giving himself access to the cure at the expense of everyone else.

In "Tea Peter", he holds a rally to shut down Quahog’s government. He manages to get enough supporters, including Peter, into getting Mayor West to shut it down. His main purpose for shutting down the town's government is revealed when Brian shows the Griffins how much pollution Carter is causing. His scheme also caused basic services to become unaccesible and the entire town being put in a state of panic. He obviously turns down on helping Peter restore the government, but his excessive pollution is ultimately stopped when Peter reforms the government as an "entirely new thing", albeit without getting the praise that he was expecting. 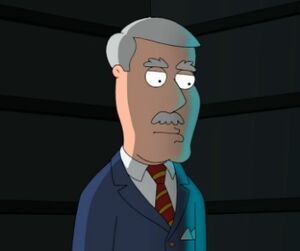 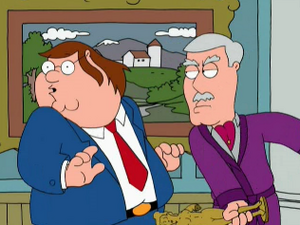 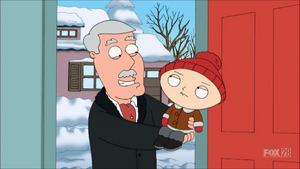 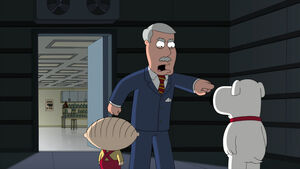 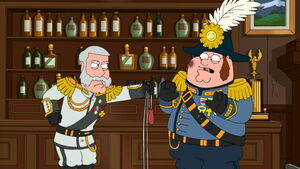 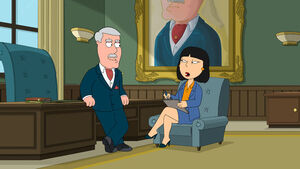 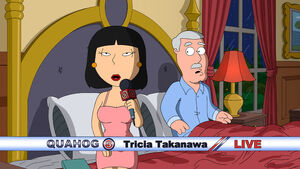 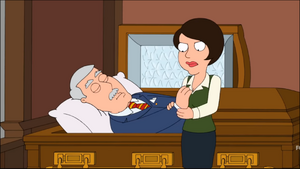 Carter sexually harassing woman from beyond the grave. 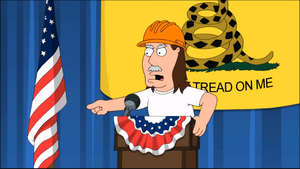 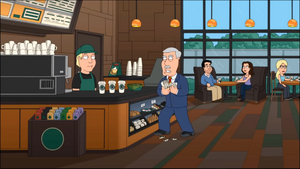 Carter stealing from a Starbucks. 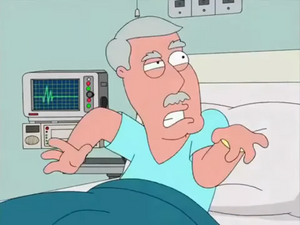 Carter having a stroke after learning Peter Griffin has control over Pewterschmidt Industries. 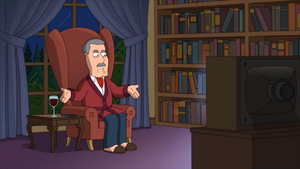 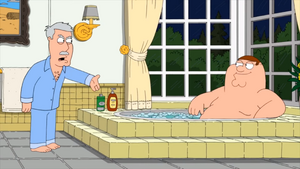 Peter blackmailing Carter after learning about his affair. 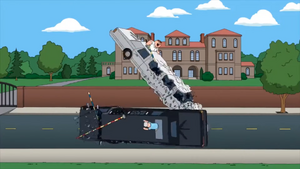 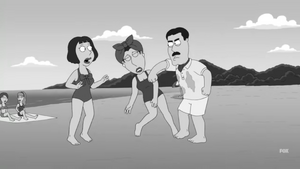 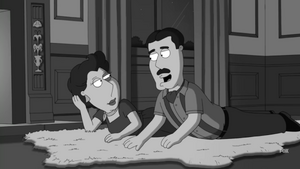 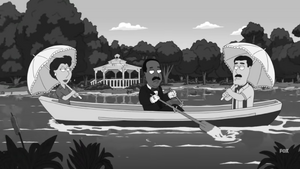 Carter and Babs on a romantic date. 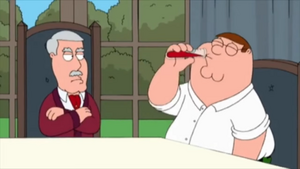 Carter forcing Peter to drink his blood for his own amusement. 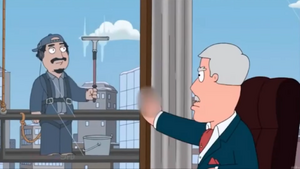 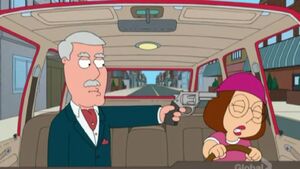