Murder and eats its victims (possibly).

The Cartoon Cat is a hostile cryptid and urban legend created by artist Trever Henderson. He is a giant cat who resembles a cartoon cat, hence his name.

Five days later on August 15, a third picture is seen of the Cartoon Cat, where its head appears to be on the ground, as its neck became longer. Then on August 22, Cartoon Cat appears to be standing outside of another abandoned building, where it's looking very vicious and angry towards its victims.

As the time went by, on September 26, a very unnerving picture of the creature was released, where the monster is staring directly at the camera, with its teeth out, as it is presumably about to eat its victim. The first four appearances were somewhat friendly unlike this one.

The final image of the Cartoon Cat appeared on October 10, where the Cat is looking very sinister, as it is possibly about to murder and eat its victims. However, it has never been confirmed to eat or kill people yet. On this picture, there is REDACTED covering information all over the image about Cartoon Cat, showing the sinister info about this being is trying to be hidden from the public. One possible interpretation of the sheet shows information that reveals Cartoon Cat has relations to a “show from 1939”, a nocturnal creature and incredibly cruel. Presumably, more text reveals that it is “extremely horrible”, it’s often found in a number of abandoned structures, and it may be related to many unsolved disappearances, though the interpretations of the censored text could be different. The creepiest part about the image was the description where presumably it either says that Cartoon Cat is the most monstrous of all the cartoon characters to ever be released to the public, or even that Cartoon Cat is the most evil of all of Henderson’s monsters. However, another one of Trevor’s creations, The Man with the Upside-Down Face was shown to be much worse than Cartoon Cat with a clearer moral agency. While Cartoon Cat only attacks people when they are in/around his lair and, if his backstory of being an abandoned 1939 cartoon is true, attacks people for revenge, the Man with the Upside-Down Face attacks people for his own sickening pleasure, feeding off of negative emotions from those who had unfortunate car accident tragedies.

Further information can be uncovered on Trevor’s responses to people’s questions on his Tumblr. In these, Trevor states Cartoon Cat is the most dangerous monster in his collection, obviously excluding the Giants. He also states Cartoon Cat is so dangerous, other monsters avoid the dirt mall it sometimes resides in, “if they know what’s good for them”. When asked why he is so dangerous, Trevor simply responded: “unchecked limitations”.

The latest pictures of Cartoon Cat have revealed much more information on the monster. A photo was posted showing what seems to be an angry looking Cartoon Cat, but brightening the image reveals an unusual thick, almost blocky body, with only Cartoon Cat’s face and arm being recognizable. His latest image shows his regular look, expect for the fact that he has five eyes, while yet another illustration of him displays his face having only two very realistic-looking eyes. These images and inconsistencies in Cartoon Cat’s appearance and his size such as his feet repeatedly changing from points into those resembling shoes and his size that ranges from towering over a stop sign to being only slightly taller than a person seemingly imply that like an actual rubberhose 30s cartoon, Cartoon Cat can change his form, size and body at will, stretching, adding, changing and increasing the size of his body parts on a whim, which could explain why he is so dreaded even among other monsters: he doesn’t obey traditional laws of life, he’s “malleable”, acting like a shapeshifting cartoon except much more evil and sinister, possibly hurting and taking other beings for fun. If his backstory is true, then it is possible Cartoon Cat attacks people for revenge (if not, then he might possibly be defending his own lair when people are in or around it).

Cartoon Cat has many abilities that back up his reputation among all as a very dangerous creature. It is implied that he has shapeshifting abilities like a typical 30s rubberhose cartoons, able to change his size and the length, presence and absence of his limbs, he’s “malleable”, as Trevor says. Again, this makes him very dangerous even to other creatures, as he’s able to defy the laws of physics like a cartoon would. 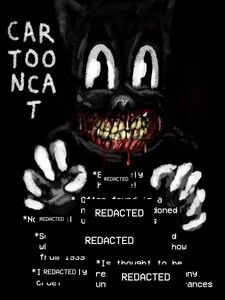 Cartoon Cat entering through a door. 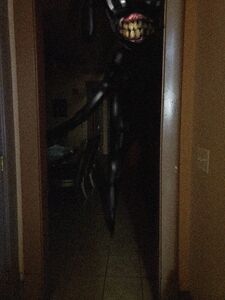 Cartoon Cat in a doorway.
Add a photo to this gallery

Who is Cartoon Cat?
Cartoon Cat-2
Add a photo to this gallery

Retrieved from "https://villains.fandom.com/wiki/Cartoon_Cat?oldid=3636348"
Community content is available under CC-BY-SA unless otherwise noted.