The Casino Bosses are a group of minor antagonists from the 2017 videogame Cuphead. They are the minions of King Dice.

All Bets Are Off

The Tipsy Troop are a trio of alcoholic beverage containers: a Scotch Glass, a Martini Glass, and a Whisky Bottle. They attack simultaneously The Scotch Glass pours his contents all over the ground. The Martini Glass summoning olive bats. These bats shoot their eye out to attack, though Cuphead can destroy them with his parry. The Whiskey Bottle shoots whisky at the player. When defeated, they will become dazed and confused.

Chips Bettigan is a stack of poker chips. He attacks by splitting his body into random sections and sliding across the stage, trying to hit the player. When defeated, he falls apart.

Mr. Wheezy is a giant cigar lit by King Dice. He spits fire projectiles and vision-impairing smoke, as well as summoning cigarette bats. Occasionally, he will disintegrate into ashes and travel to the ashtray on the other side of the stage, attacking the player with his sheer heat. When defeated, he is stomped out by King Dice.

Pip and Dot are a domino swinging from a swing in a spike-filled room. They can spit spiked dice to hit Cuphead. Cuphead can use his parry on the pink dice. Sometimes, Pip will summon a Domino Bird from his hat, but it can be destroyed by bullet fire. The player must be constantly moving, as the room is moving and pulling them towards spikes. When defeated, Dot will kick Pip with her red heels, probably because she thought their loss was his fault.

Hopus Pocus is a white rabbit in a blue tuxedo and bow tie in a black magician's hat, twirling a wand baton. He will use his magic to summon a circle of rabbit skulls to surround the player, which can only be escaped through a narrow gap. He will also conjure a series of card suits to fly across the screen; the player can parry the heart to avoid them. When defeated, he will be strangled by his own bow tie, which indicates that it has a mind of its own and is punishing Hopus for his failure.

Phear Lap is a giant skeletal racehorse that flies over a ghostly racing track. He will spit blue presents that explode into golden horseshoes at the player for his main attack. Meanwhile, a frightening cloaked spirit will attack the player while they are fighting Phear Lap. When defeated, he will look distraught and angrily shake fists of money.

Pirouletta is a ballerina roulette wheel that dances back and forth on a roulette table for her main attack. She will miss if you use the smoke bomb to avoid getting crushed underneath her. She will stop at either end and spin, launching roulette balls into the air to rain down on the player. When defeated, she will look very upset and distraught.

Mangosteen is a giant billiard 8-ball with eyes and teeth. He will spit multicolored orbs at the player and summon billiard chalks that will slide across the stage and try to hit the player. Once defeated, he will begin vomiting black liquids out of his mouth.

Mr. Chimes is a cymbal-banging toy monkey with empty eye sockets hanging from the claw of a claw machine. In this match, players must play a memory game and match up pairs of cards in the background. With each successful match, Mr. Chimes will become temporarily vulnerable, but shoot golden music notes. Once defeated, he will slam his head in between his cymbals, probably out of anger to himself. 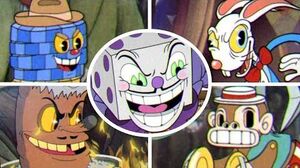