That Guy With the Glasses

Drive the Critic to insanity.

Casper is a recurring antagonist in the show That Guy With the Glasses. The Nostalgia Critic has battled Casper several times in his appearances.

Casper first appeared in the Nostalgia Critic review of Casper as the main antagonist. As the Critic was starting his review, he complained about Casper, especially his nice demeanor and general happiness. Casper suddenly flew in through the wall and punched the Critic in the face multiple times. He said that he was tired of only being known as friendly, and that the only way he knew to scare people was showing them Casper.

Casper got more arrogant and proud as the film went on, becoming more evil, dangerous, and mean-spirited, and he taunted the Critic, saying he was a bad comedian and how he wouldn't know what the real essence of all comedy is. He says, ironically at the wrong time, that the spirit of comedy is "timing", which would eventually become his catchphrase.

The Critic points out stupid things Casper said throughout the movie, such as being made of a tingling feeling and the creepy "Can I keep you?" line. He also points out things such as the movie having no plot (for instance, the famous "treasure" in the Manor was just a baseball).

The Critic is finally relieved that the movie is over, and he says that overall he enjoyed it, that it had a funny tone and was lighthearted and interesting. Casper is suddenly infuriated that the Critic didn't like his movie because he could see through his scornful sarcasm. So, Casper punches the Critic, laughing, and when the Critic apparently flees, Casper laughs with "That's right, flee from the Friendly Ghost, ahahahahaha!" To his shock, the Nostalgia Critic steps out with a Ghostbusters uniform and proton pack. Casper screams, and flees, and the Critic chases him down the city streets yelling "CASPERRRR!" He eventually chases the ghost into a convention, full of science fiction fans. The Critic battles it out with Casper, who mocks him in the air and possesses a man, but the Critic exorcises him using the proton pack. Casper then is tackled by the Nostalgia Critic and they both fall into a swimming pool.

The Friendly Ghost appears during a review of Child's Play 2, where Phelous is asking the Critic if he has a "soul" he can use so he can do Charles Lee Ray's dark magic ritual. To Phelous' surprise, Casper flies out, shouting "TIMING!" and then Phelous zaps Casper into oblivion, banishing him. The Nostalgia Critic is hurt at this, saying Casper was one of his longest-running gags, and Phelous said "Yes, and that's why it sucked!"

However, Casper is not dead, he reappears in Child's Play 3 review, where he appears when Phelous summons him but Phelous zaps Casper into the toilet, imprisoning him forever. Casper is furious at being imprisoned, until the Critic says the movie is so bad he needs to take a crap, and Phelous tries to warn him of the ghost but too late - the Critic takes a dump on Casper. Hilarity ensues. Casper scolds the Critic as the credits roll and says how he will kill the Critic for constantly getting him to do the Timing meme. The Critic asks Casper if its possible for ghosts to have an Afterlife to which Casper insults him some more.

Casper is seemingly freed of his toilet prison, and he appears again in The Haunting review, where he appears mocking the kid ghosts in the mansion. Casper zooms around and says "Timing" and disappear into the curtain.

Casper makes a brief cameo in this review, where he turns up alongside other horror characters such as Morticia Addams, Count Olaf, and Owen Wilson's Haunting character to emphasize the mansion's uninventive design. 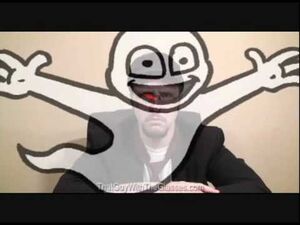 Add a photo to this gallery
Retrieved from "https://villains.fandom.com/wiki/Casper_(meme)?oldid=3875431"
Community content is available under CC-BY-SA unless otherwise noted.