Leader of the Haitian Mob

Underboss of the Clay crime family

Kill Lincoln for deceiving her (player-determined).

Cassandra is one of the three tritagonists (alongside Vito Scaletta and Thomas Burke) of the 2016 video game, Mafia III. She is the enigmatic leader of the Haitian mob who becomes an underboss of Lincoln Clay's crime family, and assists him in destroying the Marcano crime family and breaking their control over New Bordeaux.

She was voiced by Erica Tazel.

Not much is known about Cassandra's past, but it's noted that she had a troubled youth, and she presumably grew up in the Caribbean or in the Delray Hollow of New Bordeaux. She would go on to have a daughter named Caroline, who was killed by the Dixie Mafia alongside her mother, leading to her to go against them. Cassandra became the leader of the Haitian mafia in the Hollow, and would put Baka as the false boss to protect her position. Due to the mystery surrounding her, Cassandra was rumored to be a vampire or zombie resurrected via voodoo magic, which is highly unlikely. Running her operations in the Hollow, her base was a voodoo shop that was originally owned by Kilmic Eugene Robbins, but it's unknown how she gained ownership of the property. By 1968, Cassandra would learn that the Black Mob leader, Sammy Robinson, would start to serve Italian mob boss Sal Marcano, which led her to attack his business.

Cassandra's faction would be hurt by Sammy's foster son, Lincoln Clay, who decided to eliminate Baka when he learned that Sammy was being attacked by the Haitian mob. She would pretend to be an abuse victim of Baka when Clay killed him before leaving, and her attempts to attack the Black Mob were stopped after Robinson and his family were killed by Sal. Cassandra would meet Lincoln once again when he wanted to recruit her as his underboss to kill Sal, and she agrees in exchange that he kill Ritchie Doucet for his hate crimes and that she gets control over the Hollow. After Doucet is killed, Cassandra becomes one of Lincoln's underbosses alongside Vito Scaletta and Thomas Burke, who also want to see the Marcano crime family be destroyed. She can be assigned territories by Clay during sit-downs, but will clash with Vito and Burke over control of various turfs.

Cassandra can give Lincoln missions that often involve arming the African community with weapons to protect themselves from the Dixie Mafia, and the player can give her locations over the other underbosses. If Lincoln completes all of her side missions, Cassandra will revealed that she lied that her sister was killed by the Dixie Mafia, but it was actually her mother and daughter that were killed. Due to her support, Lincoln managed to destroy the Marcano crime family and their control, resulting in him becoming the new boss of the city.

If Lincoln decides to rule New Bordeaux with his underbosses, Cassandra presumably maintained her rule of the mob and running territories given to her.

If Cassandra is given all districts and Lincoln decides to leave New Bordeaux, Cassandra continued her control over the Haitian mob but her title wasn't respected by others. Many criminals and mobsters went after Cassandra and her organization, but failed due to her length of control over the city. When the governor declared martial law and sent the national guard, she assassinated him to send a message. Despite this, her organization would be crippled by a hurricane that was named Cassandra after her, and she was presumably killed by it or left the city.

If Lincoln doesn't give Cassandra any turf, she will end her partnership with him and retaliate by sending her men after him. He will kill her men and critically wounded her, where she will give him a locket that has a picture of her and her late daughter, Caroline. After her demise, Emmanuel Lazare takes over as the leader of the Haitian mob as Lincoln and his other underbosses continue their campaign against the Marcanos.

Another act of betrayal can happen if Lincoln takes John Donovan's advice on killing his underbosses to have complete control of the city, where she, Vito and Burke are killed during a sit-down. Her death is immediately avenged by Father James since he placed a bomb in Lincoln's car, resulting in him dying in the explosion. 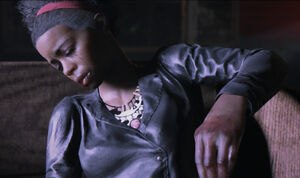