Destroy the possessed animatronics and free the trapped souls.

Take revenge on William Afton (both succeeded).
Put an end to the legacy of Fazbear Entertainment (failed).

Henry Emily, also known as the Cassette Man, is the overarching protagonist of the Five Nights at Freddy's franchise.

Henry is the original owner of Fredbear's Family Diner, as well as the creator of Freddy Fazbear and the rest of the animatronic mascots and father of Charlotte.

He was voiced by Dave Steele.

Henry was the owner and creator of Fredbear's Family Diner, the first of what became the widely successful Freddy Fazbear's Pizza. His business partner and closest friend was William Afton, who would help him design and build the Freddy Fazbear gang that served as the mascots for their restaurant.

When Afton started to use their restaurants to murder children, his first victim was Henry's own daughter Charlotte, who went on to possess the Puppet. Wracked with grief, Henry retired and left Fazbear Entertainment while Afton went on to kill at least five more children, a tragedy that became known as the Missing Children Incident.

Years passed, and after the events of Fazbear's Fright: The Horror Attraction, four of the five victim souls were set free, while Afton's death led to him becoming Springtrap. Realizing that it was his inaction that allowed the tragedies Afton caused, Henry took the responsibility of freeing the remaining souls, the ones involved with Circus Baby's Entertainment and Rental, as well as defeat his old friend once and for all. He masterminded a plan to have an unknowing volunteer begin owning and managing a "re-branded" Freddy Fazbear's Pizza location, whose ventilation shafts were actually a massive incinerator seperate from the rest of the building. Using a cassette player, Henry instructed the volunteer on how to operate the restaurant and how to salvage the animatronics that appeared in the alley outside. With the volunteer making the pizzeria appear genuine Henry was able to lure Springtrap and the rest of the remaining animatronics to his false restaurant.

In the game's Completion Ending, all of the animatronics are successfully trapped inside of the building and Henry comes on for one last transmission on Saturday, this time addressing everyone in the building. He reveals his deception to the volunteer and the animatronics, and that he believes the only way for this tragedy to end is for it to become forgotten. First he thanks Michael Afton for his bravery as the unwitting volunteer, despite not intending for him to take the role. He tells him that an escape was planned for him, but scrapped it knowing that Michael would probably not want to leave anyway. Henry assures him that he is not alone, he will remain aswell. Next he turns to the animatronics demanding that they stop struggling and release the spirits trapped inside of them. He hopes they are able to finally find peace in death, but tells Springtrap that the darkest pit of hell has opened for him. Finally he apologizes to his daughter, whom he knew would also come to the false pizzeria, for not being there to save her from William. He knew she wouldn't be content to just disappear like that and tried to help the other victims, but he is going to save her now by putting her to rest. As he speaks the building starts to burn down. Henry, Michael, Springtrap and the rest of the animatronics all perish in the fire.

In the Insanity Ending where the player buys and accesses the Egg Baby Data Archive, they hear Henry confessing his guilt for playing a part in the pain and misery Afton has brought to so many people, but while he could "make himself sleep" he cannot in good conscience do that without fixing his mess. Upon being discovered by Fazbear Entertainment, the player's character is declared insane and sent to receive a lobotomy to cover up what they have learned.

If not all of the possessed animatronics are salvaged, Henry will say that requirements of the player's job were not met and will fire the player's character. It is unknown what he would do afterwards.

Despite Henry's efforts to leave his creation to be forgotten, Fazbear Entertainment revives itself some time after his death. With Henry having destroyed all evidence to its associated tragedies, Fazbear Entertainment commissioned the Freddy Fazbear Virtual Experience and the Fazbear Funtime Service in an effort to rebuild its reputation. In the process they accidentally recreate William as a digital manifestation of his Spring Bonnie form, allowing him to secretly recruit a follower so his legacy will continue.

While not a "true" villain, Henry (or the Cassette Man) is shown to be very serious and stern, only seeking revenge and the liberation of the trapped souls. While his goals and objectives are noble, his methods are extreme, as his only solution is to destroy all of the animatronics, the player's character (a total innocent, as they had no idea what was happening), and himself in a blaze. He is shown to be extremely intelligent and manipulative, as (at least in the Good Ending) has successfully gotten all of his targets together and gotten the player's character to complete that task without even knowing. Despite his extreme methods, he really is a tragic character, losing his daughter and feeling destroyed over her loss, swearing to avenge her and set her free. 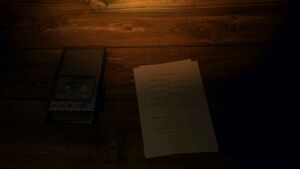 Cassette Man's cassette player during salvage.
Add a photo to this gallery 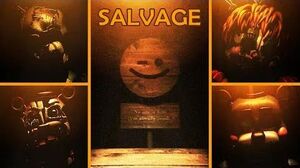 FNAF 6 - All Salvage Minigames (No Damage) 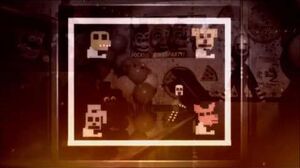 Retrieved from "https://villains.fandom.com/wiki/Cassette_Man?oldid=4214923"
Community content is available under CC-BY-SA unless otherwise noted.