Cassian is a supporting antagonist in John Wick: Chapter 2. He is the bodyguard of Gianna D'Antonio and an old colleague of John Wick. He is one of the few characters in the series who can fight on even terms with John Wick.

He was portrayed by the hip hop rapper, Common, in his third villainous role after portraying Mr. Price in Run All Night, Monster T in Suicide Squad, Stonekeeper in Smallfoot, and Kiburi in Disney's The Lion Guard.

Cassian accompanies Gianna D'Antonio to a secret concert in the catacombs of Rome. After guarding Gianna for some time, Cassian is sent away by her to entertain the guests while she changes her make-up. However, with Cassian absent, John Wick is able to approach Gianna alone. After a brief conversation, Gianna commits suicide.

When John is on his way out, he encounters Cassian who realizes why Wick has come. After a brief calm, both draw their guns and shoot at each other but, due to both men wearing protective armor, remain unharmed. While Wick escapes into the crowd, Cassian sends the security after him. Cassian himself rushes into Gianna's chambers where he discovers Gianna's dead body in the bathtub.

While Wick fights off both Cassian's men and the men of Santino D'Antonio, who were sent to kill Wick to tie up loose ends, Cassian comes after Wick as well. After Wick has killed every of his attackers and has left the catacombs, he is run over by Cassian in a car. Cassian jumps out of his car immediately and both men shoot at each other. After their weapons are empty, the two resort to a brutal fistfight throughout Rome. Although both are wounded in the fight, the battle leaves no clear victor and swiftly ends when the two crash through the window of the Continental. Once inside, they are sternly reminded by the manager Julius that there may be not business done inside the Continental. He advises the two to go to the bar instead in order to calm down.

While at the bar, the two discuss their motivations, and John Wick tells Cassian that he killed Gianna because her brother Santino D'Antonio forced him to with the Marker he gave him. Cassian expresses understanding of why John did what he did, but also states that he has a duty to get revenge on John because John killed his ward.

After his men have failed to kill Wick, Santino puts a bounty of seven million dollars on his head. This causes every assassin in New York to come after Wick, including Cassian who flies in from Rome to get his revenge. The two encounter each other in a public place and, both equipped with silenced guns, fire at each other. Wick eventually flees into a subway station where he is encountered by other assassins. He murders all of them and eventually stumbles upon Cassian again who is watching him form another platform. When a train comes in on the tracks separating Wick from Cassian, both enter the train. As the crowd of people inside gradually dwindles, the two get closer and closer to each other and when the train is almost empty, the two draw their knifes and attack each other again. This time, John manages to get the upper hand and rams his knife into Cassian's chest. While he sits Cassian down on one of the seats, Wick tells him that the knife has punctured his aorta and that he has a choice of either pulling it out and bleeding to death or leaving it in, stopping the hunt, which would give him a chance to live. Wick exits the train at the next station, leaving a grimly smiling Cassian behind. 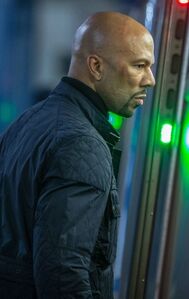 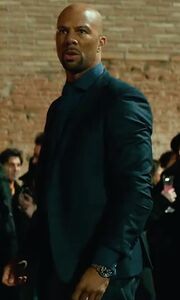 Cassian at the dinner party. 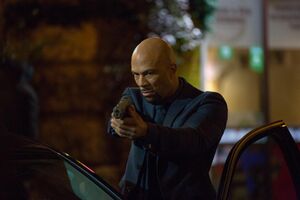 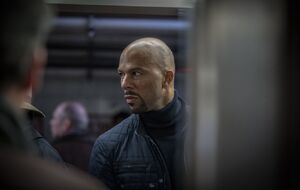 Cassian at the subway station.
Add a photo to this gallery

Retrieved from "https://villains.fandom.com/wiki/Cassian?oldid=3651420"
Community content is available under CC-BY-SA unless otherwise noted.