To avenge his father's death (formerly).

Cassidy Cascade is the (former) secondary antagonist of the second season of Scream Queens. He is revealed to be the Green Meanie and begins working with Nurse Ingrid Hoffel, who becomes the brains of the operation. His reasons for being the Green Meanie is because his father, Bill Hollis, was a victim of malicious malpractice at the hospital, and his mother conspired with him to use the Green Meanie costume to get the hospital closed down.

He was portrayed by Taylor Lautner, who also played Youngblood in Danny Phantom and Andy in Grown Ups 2.

Dr. Cassidy Cascade is born to the late Bill Hollis and his wife Jane in 1985. During a trip to the hospital, Bill was murdered by the staff, who dumped his body in the swamp to avoid dealing with him. Due to this, Cassidy chose to exact his revenge in 2016. He began dressing up as the Green Meanie and killing the hospital patients.

In "Blood Drive", he is confronted by Nurse Ingrid Hoffel, who gives him the offer to be partners, with him fulfilling the muscle and her being the brains. He refuses the offer at first but then accepts and they murder Chanel #9 together.

At the end of the episode, he gives Nurse Hoffel a Green Meanie costume and they officially become a team, however, in the season finale, "Drain the Swamp", he attempts to abandon the Green Meanie team, resulting in him being kidnapped by Hoffel along with the rest of the characters. After Denise rescues them, he is killed by Hoffel when he takes a machete to the chest to save Sadie.

Cassidy's and Ingrid's corpses were next seen on a stretcher, whilst Chanel #3 dramatically runs after Cassidy's corpse when Dr. Holt stops her. 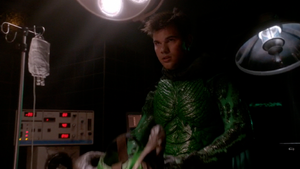