Escape from the Jedi and police (failed).

Cassie Cryar is a Terallian Jango Jumper criminal who appears in the Star Wars: The Clone Wars episode "Lightsaber Lost".

She was voiced by Jaime King, who has also portrayed Aurra Sing.

She conspired with her partner in crime, Ione Marcy to murder her boyfriend, Nack Movers. She was responsible for stealing Ahsoka Tano's lightsaber, causing a pursuit though out the Coruscant skyline. After she successfully stole Ahsoka's lightsaber, she jumped into Ione's vehicle to flee from the scene.

However, in the train station, Ione was arrested but Cassie escaped, entered one of the trains, and holds the Twi'lek mother and child hostage, while Ahsoka tries to calm her down but fails. Fortunately, Jedi Master Tera Sinube arrived and confronted briefly with her and stopped her, leading the police droids to arrested her for theft. 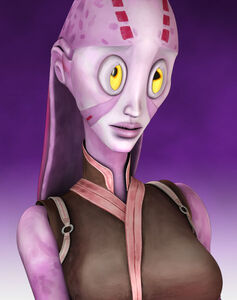