Unearth the godlike power of the Shuriman Tombs (succeeded).

Give the Black Rose the power to defeat Swain.
Kill the assassins who tried to kill her mother.

Cassiopeia Du Couteau, simply known as Cassiopeia or The Serpent's Embrace, is a villainous playable character in the multiplayer online battle arena game League of Legends, and appeared as the main antagonist in Shurima: Descent into the Tomb and an anti-villain in Rise of Shurima.

Once the youngest and most beautiful daughter of the Du Couteau family, Cassiopeia was cursed in the tombs of Shurima as she searched for an ancient power. Now transformed into a deadly serpent, Cassiopeia preys at night on her unsuspecting enemies as they are petrified by her venomous embrace.

The 66th champion to be added to the game, Cassiopeia was released on December 14, 2010, and is most commonly played in the mid lane.

She is voiced by Karen Strassman, who also voiced Zyra in the same game, as well as ARIA in Killer Instinct, Mileena in Mortal Kombat, Poison in Street Fighter, Rouge the Bat in Sonic the Hedgehog, Suigintou in Rozen Maiden, and Sola-Ui Nuada-Re Sophia-Ri in Fate/Zero.

Before her transformation into the half-snake half-human she is now, Cassiopeia was a highly influential temptress noblewoman. The Du Couteau family were a powerful and wealthy noble house under Emperor Darkwill, and as the youngest and most beautiful of her family, Cassiopeia was not different. But while Katarina, her sister, followed in the footsteps of their father, General Du Couteau, Cassiopeia grew ever closer to her mother, Soreana Du Couteau, who was secretly an agent of the cabal known as the Black Rose.

The Black Rose in Urzeris

When Cassiopeia was still a child, she and her family moved to the city of Urzeris, a Shuriman city that had recently been claimed by General Du Couteau for the Noxian Empire. At their new residence, Soreana survived an assassination attempt and was left in poisoned, bed-ridden condition. Cassiopeia stood by her mother as she recovered, and while General Du Couteau made his way to Ionia for Darkwill's invasion, Soreana told her daughter the secrets of the Black Rose, even inducting her into the secret organization by the time she reached adulthood.

Despite her young age, Cassiopeia would grow into one of the swiftest and deadliest of the Black Rose's agents, with her first task being to hunt down the assassins who sought to kill her mother. As she aimed to help the cabal in their plans for expansion into Shurima, the Black Rose's plans were suddenly interrupted when Jericho Swain overthrew the easily manipulated Emperor of Noxus. To make matters worse, Cassiopeia's father had already pledged the Du Couteau house's loyalty to the new regime, severely hindering the plans of Soreana and Cassiopeia.

Furious, Soreana sent her daughter into the ancient Shuriman lands to find a magical power that could be used to the cabal's advantage. With little choice, Cassiopeia set off on a search for the Tomb of Emperors, where she hoped to unearth the godlike power of the mythical Ascended.

At a market at the edge of the desert, Cassiopeia sought out the mercenary Sivir to lead her to the lost city. Armed with a legendary blade, Sivir seemed to be the perfect guide for such a treacherous journey, and Cassiopeia offered a hefty sum for the services of Sivir and her men. Sivir agreed, and after five days of searching the Shuriman heat, the two located the ancient ruins and descended the underground stairway.

Ancient treasures awaited them beneath the tomb, astonishing Sivir and her men. But the grandeur made them reckless, and Sivir's men were caught and killed in traps. Sivir was horrified, but Cassiopeia was undisturbed, as her eyes were only on an ancient statue of a serpent hanging over the door. They had made it to the Tomb of Emperors.

Realizing that Sivir's blade is the key to unsealing the tomb, Cassiopeia stabbed Sivir in the back and placed the weapon into the door, waiting in anticipation. But before she could make another move, the statue of the serpent came alive and impaled her with its jaws. Cassiopeia's flesh was seared with acid as she transformed into a hideous creature of scales and venom, leaving her unconscious as Xerath and Renekton escaped the tomb.

When Cassiopeia came to, she was horrified by her monstrous appearance and locked herself in a crypt to hide. After weeks of weeping, slithering, and enduring the physical torture of her transformation, Cassiopeia eventually accepted her fate when she realized the unique powers she had been bestowed with. While the curse had transformed her into a monster, Cassiopeia had indeed gotten what she came for: ancient power that could prove useful to the Black Rose. Cassiopeia could now spit venom, crush stone, and petrify her enemies with nothing but her poisonous glare. This curse, Cassiopeia realized, could be a blessing in disguise, as she slithered her way into the night to prey on her next victims...

In game, Cassiopeia takes the role of a battlemage-type character, mainly using poison based attacks. She can fire a toxic explosion with Noxious Blast, spit bolts that turn into clouds of poison with Miasma, launch forward to bite enemies (Healing herself if the foe is poisoned) with Twin Fang, and fire a blast of petrifying magic with Petrifying Gaze.

As a Noxian noblewoman, Cassiopeia was born into a life of privilege, which would lead her down a path of arrogance. Cassiopeia loved her mother more than anything, and would follow in her footsteps to become a deadly agent of the Black Rose who used manipulation and seduction to her advantage. Highly intelligent, Cassiopeia was quick on her feet and executed tasks with stealth and efficiency, which in turn bred a treacherous mindset in the young noblewoman, one she would later use in her betrayal of Sivir at the Tomb of Emperors.

After her transformation, Cassiopeia was horrified by her hideous appearance and went into hiding, but eventually her determination led her to accept her newfound powers. Learning from her past arrogance, Cassiopeia even became capable of heroic deeds in the streets of Urzeris, hunting down child murderers and bringing them to justice. She is always looking for new victims to challenge her newfound powers, and though her life as a noble is over, she is excited to see what future her powers will bring.

Cassiopeia in "The Shedding of Skin".

Cassiopeia and Sivir in "Shurima: Descent into the Tomb". 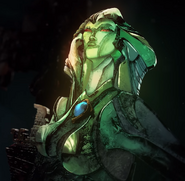 Cassiopeia stabbing Sivir in the back.

Cassiopeia's transformation under the curse.

Shurima Descent into the Tomb Cinematic - League of Legends