Cassius is the secondary antagonist of the 2000 supernatural comedy film Little Nicky and the first boss of its Game Boy Color tie-in game. He is one of Nicky's supremely evil brothers.

He was portrayed by the late famous actor Tom "Tiny" Lister Jr., who played Deebo.

The story revolves around a struggle to determine which of Satan's three sons will succeed their father as ruler of Hell. Adrian is the most devious and manipulative, Cassius is the cruelest and outrageous, and Nicky is their father's favorite. Adrian and Cassius claim that Nicky's mother is a goat and torment him by Mindwrestling. Nicky has had a speech impediment and a disfigured jaw since Cassius hit him in the face with a shovel when he was a child.

Cassius was the son of Satan and an unknown fire dragon. Having been the "Prince of Darkness" for 10,000 years, Satan assembles his sons to decide which of them will succeed him, but instead he keeps the throne for himself. Angered by this decision, Adrian and Cassius go to Earth to create a new Hell by possessing religious and political leaders in New York City.

As they leave, they freeze the entrance to Hell, preventing more souls from entering and causing Satan's body to begin decomposing. To stop Adrian and Cassius, Satan sends Nicky to Earth with a silver flask that traps whoever drinks from it inside. At first, Nicky has trouble staying alive on Earth. He is killed several times, landing in Hell and returning to New York each time. While learning how to eat and sleep, he meets a talking bulldog named Mr. Beefy, rents an apartment with an actor named Todd and falls in love with a design student named Valerie.

Cassius possessed Whitey Duvall; the referee of a Harlem Globetrotters game. When Nicky goes to the court and tricks Cassius into the flask, Satanist metalheads John and Peter are so thrilled with his performance that they become his devoted fans. Towards the end of the movie, both Adrian and Cassius are shoved up Adolf Hitler's buttocks. 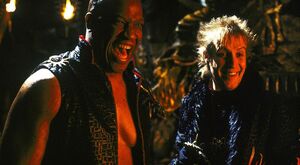