Caster is a major antagonist from the light novel and anime series Fate/Zero, serving as the secondary antagonist in Part I of the story. He is the servant of Ryuunosuke Uryuu during the Fourth Holy Grail War and has an obsession with Saber, who he mistakes for Jeanne d'Arc. Caster derives pleasure from providing his victims with a moment of relief and hope before murdering them in horrific manners.

He is voiced by Satoshi Tsuruoka in the Japanese version of the anime and Dan Woren in the English version, the latter of whom also voices Shuji Ikutsuki and Zurmudd.

His true identity is Gilles de Rais, also known as Bluebeard, who was a French nobleman who was once a comrade-in-arms of Joan of Arc. He remembered the time that he and Jeanne were decorated as saviors by King Charles in the cathedral with the ars nova playing in the background. In his lifetime, he admired Jeanne so deeply that he was devastated when she died, leading his faith in God to change greatly as he thought God had abandoned Jeanne. He began studying the dark arts under François Prelati, eventually receiving his own spellbook.

He began causing atrocities that he continued for 8 years until the Church and State caught him, seizing his wealth and land, after which he was executed for his crimes. After his death, he was removed from the cycle of transmigration and became a legendary spirit. He first introduces himself as Bluebeard, a name taken from a fictional character based on Gilles himself - a mass serial children murderer - to his Master, Ryuunosuke.

Just like his equally murderous Master, Ryuunosuke, Caster is almost utterly devoid of any morality, and has no interest in obtaining the Holy Grail. He loves to offer his victims with brief moments of respite, or even the hope of release or escape, before causing them death through whatever horrific and gruesome means possible. According to himself, allowing his victims hope will amplify the despair and terror at the moment of their death, a fact that he himself delights in. In Fate/Grand Order, it is shown that his utter lack of regard for life stems from his anger towards the world for its rejection of Jeanne d'Arc, whom he was shown to be in love with, with his actions being rationalized in his mind as divine retribution against humanity for killing her.

Caster was summoned shortly before the Fourth Holy Grail War began. His Master was Ryūnosuke Uryuu, a serial killer who unwittingly performed a successful summoning ritual using the blood of a murdered family. Ryuunosuke lacked a cataylst so the Grail chose a servant with the closest personality to Ryuunosuke.

He is also capable of keeping human beings in stasis with his magic, allowing his master to play with the victims organs as a musical instrument.

Caster initially expresses an interest in Saber, appearing to be familiar with how she came to ruin at the end of her life. In truth, it is because he has mistaken her for Joan of Arc, whom he had been infatuated with when alive. Even after Saber reveals her true identity, Caster continues to delude himself, believing that her memories were warped by the trauma of her death. He even makes plans to capture Saber and force her to remember her 'true' past.

It soon comes to the attention of Risei Kotomine, the Holy Grail War's regulator, that Caster is kidnapping children throughout Fuyuki (for use in his spells and for his Master's amusement), and that he and Uryuu lack the discretion practiced by the other Master-Servant pairs. Fearing their actions might compromise Tokiomi Tohsaka's chances of winning the War, Risei suspends all fighting and offers a reward of extra Command Spells to the Master who dispatches Caster and Uryuu.

Using the captured children as hostages, Caster draws Saber out and traps her in battle with his seemingly infinite army of summoned monsters. He is defeated when Lancer intervenes, breaking through the monster horde with Saber's aid, and using Gáe Dearg to disable Prelati's Spellbook and dispel the summoned creatures. An enraged Caster then retreats.

In his second bid to capture Saber, Caster merges a horde of his monsters into an immense, Lovecraftian beast, with himself at its centre. Despite its vast strength and regenerative powers, it is ultimately defeated by Saber, who incinerates the beast with her anti-fortress Noble Phantasm, Excalibur. The light from Excalibur's blast causes Caster to recall memories from his past, before he began his forays into murder and the occult, back when he still served alongside Jeanne D'Arc. This evokes tears and a measure of regret in Caster, moments before he is destroyed along with his monster. He was the second servant to die in the Fourth Grail War.

In Fate/Grand Order, Gilles (in his earliest chronological appearance) is the victor of a previously undocumented Holy Grail War in Orleans and the main antagonist of the second scenario of the game. After winning the Holy Grail, Gilles wished for Jeanne to be brought back to life, but when the Grail refused, he instead created an evil version of her based on his memories, referred to in-game as "Jeanne Alter". He and Jeanne Alter then set about trying to destroy France, and planned to destroy the entire world, by summoning dark Berserker Servants, in order to avenge Jeanne's death. However, Gilles and all of his servants (as well as Jeanne Alter) are killed by the protagonist (and the real Jeanne, also summoned as a servant by the protagonist) as the game's story progresses.

In terms of Servants of the Caster class, Gilles is one of the weakest on record. Possessing very little ability in Magecraft himself, most of his power is derived from his Noble Phantasm, Prelati's Spellbook, which acts as a massive prana reserve and a guide for whatever spell he hopes to enact. Despite this however, due to the effects of the spellbook, he is capable of summoning near endless waves of demonic amphibious familiars without fatigue, making him a viable threat despite his failings. Much like Assassin of the fifth War, Caster is an aberration in the normal Servant summoning process who cannot be called a proper Heroic Spirit. He was never actually a practitioner of magecraft during life, and he only funded and participated in alchemical and Demon-summoning rituals lead by the magus François Prelati after his sanity was lost. Due to the massive mistakes Ryuunosuke made during the summoning ritual, he was placed into the Caster class container even though he is completely unsuited for it much like "Sasaki Kojirou" was placed into the unsuited Assassin class container. It is noted that Gille had been a true knight during life, and he could potentially handle classes other than Caster if summoned properly. Due to his wealth during life, he may also have access to the Golden Rule skill in such a case. 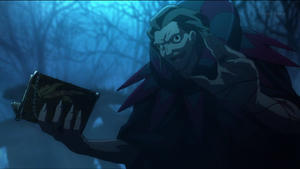 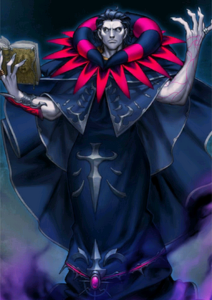 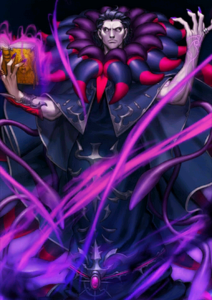 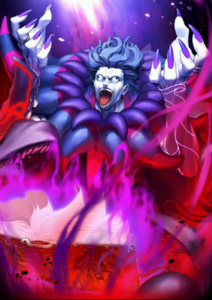 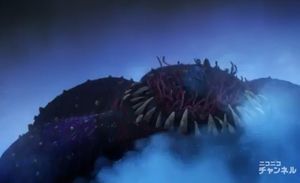 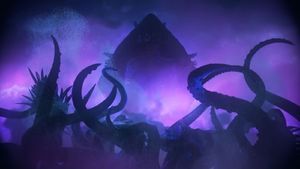 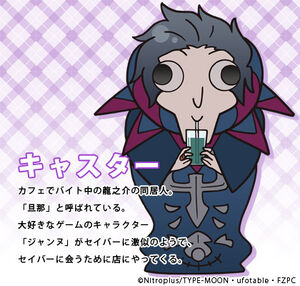 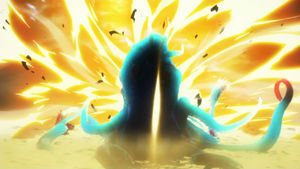