Fulfill the plan of the Alien God.

Caster Limbo, true name Ashiya Douman, is a major antagonist in Fate/Grand Order, serving as the main antagonist of Shimosa Province: The Stage of Rivers of Blood and Mountains of Corpses chapter in Epic of Remnant segment.

He later appears as one of the major antagonists in Cosmos in the Lostbelt, serving as one of the three emisarries of the Alien God (alongside Kirei Kotomine and Senji Muramasa), and later becomes a 5-start playable Servant that can be summoned by the players.

After being mentioned in the second and third Lostbelts, Douman first appears in the Cosmos in the Lostbelt as the secondary antagonist in its fourth Lostbelt chapter, Yuga Kshetra: Genesis Destruction Cycle, a major antagonist in Olympus: Interstellar City Mountain, and the main antagonist of the upcoming Realm of Hell Mandala - Heian-kyō interquel. He is an Onmyouji in the Heian period and the rival to Abe no Seimei. He is also the archenemy of Senji Muramasa.

It is also revealed that, after transforming himself into a High Servant, he combined three deites into his Saint Graph; Ītzpāpālōtl, Chernobog and Zaful, making him an Alter-Ego.

He is voiced by Toshiyuki Morikawa, who also played Fiamma of the Right, Lord Boros, Enel, Griffith (in the 1997 anime version of Berserk) and Yoshikage Kira.

Epic of the Remnants

Shimosa Province: The Stage of Rivers of Blood and Mountains of Corpses

Under the alias of Caster Limbo, Douman is the instigator of an incident in a Subcategory Parallel World in Shimosa, being the one responsible for the parallel Shirou Kotomine's corruption and the creation of the Seven Swordsmen in Shimosa, before it was revealed that he is an Alter Ego-class Servant working for the Alien God and became an ally to the Crypters. His presence actually foreshadowed the presence of Lostbelts. He created the Seven Swordsmen in Shimosa by incorporating his sorcery into the summoning ritual, he managed to turn Servants into omnicidal undead monsters.

At the end of these events, Douman claimed to have finally succeeded in finding the Lost History (called the Missing Belt, which referred to the Lostbelts). He then mentions that the "Satan" he was following was just a false name, a ridiculous joke that he got onboard with a bit too far, before sincerely apologizing to a mysterious person.

Unlike Koyanskaya and Kirei Kotomine, Ashiya hadn't done much in the first third chapters of Cosmos in the Lostbelt besides his schemes in Shimosa as an experiment for the Alien God.

Douman was mentioned in the second and third Lostbelt as an Alter Ego assisting Scandinavia Peperoncino. Unlike Koyanskaya and Kirei, Douman hasn't done much in the overall plot besides his scheme in Shimosa. It's explained in the prologue for the third Lostbelt that he's become incredibly fixated on something in the Indian Lostbelt and refuses to leave.

Douman was revealed to be the person behind the Indian Lostbelt's chaos. He meddled around with Arjuna Alter, Asclepius and William Tell's minds. According to Scandinavia Peperoncino, Douman coaxed out the Krishna side of Arjuna Alter to the forefront to enable his extremist tendencies and transplants Hindu deities onto the latter two to alter their personalities.

Douman met Chaldea crew underneath the fourth Fantasy Tree and fought them in his ghost form, but was driven away and abandoned Arjuna Alter. By the end of the chapter, he was fought by the dying Asclepius after Arjuna Alter's downfall. He was defeated and managed to escape again, using a replica of himself to withstand the attack.

Douman, possessing his one last replica body, first appeared in the Olympus alongside the remaining Gods of Olympus, Kirei Kotomine/Rasputin, the Dioscuri Twins and Europa during Zeus' conference to their next agenda. Douman relished in the joy of how the Fanasy Tree in Olympus seemed to flourish and proclaimed how the Alien God will be pleased. However, his words irritated Aphrodite who called Douman a heretic and attempted to kill him on sight, despite the warning of Demeter that Douman had turned the Indian Lostbelt into a cycle of madness.

Nevertheless, Douman kept insulting Aphrodite, which nearly resulted in a fight between them, until the Dioscuri Twins arrived and interrupted. Douman was scolded by Kirei/Rasputin and cut off his own head, which later regenerated, as his sadistic "apology" right in front of everyone, much the shock of every Olympians except Zeus. Eventually, the altercation was interrupted by Zeus, who calmed Aphrodite down and revealed how much they need the Alien God and their Emisarries, so that their Lostbelt could retain.

By the end of the chapter, Douman's final shikikami duplicate was taken down by Peperoncino, who attempted to avenge himself for what Douman had done in Indian Lostbelt. Now, without any replica left, the original Douman was stuck in his newly-created alternate realm, Mandala of the Infernal World, waiting for his final showdown with Chaldea. 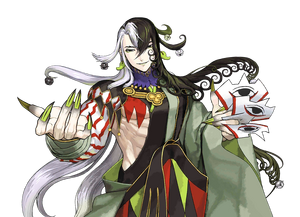 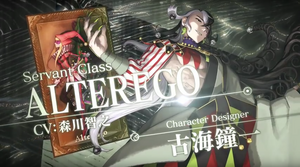 Douman in his trailer. 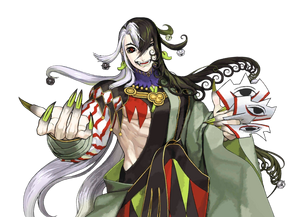 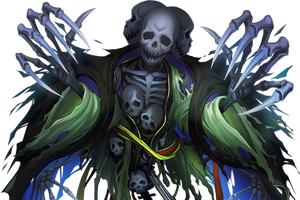 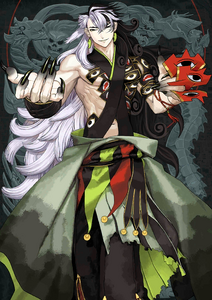 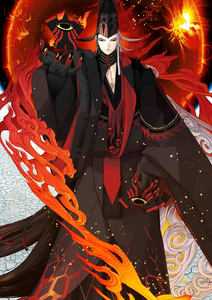