Looking out for Gotham City.

Conquer Earth 0 with The Batman Who Laughs as a Dark Knight and headquarters (currently).

Castle Bat is an alternate version of Bruce Wayne from the Dark Multiverse and is later recruited by The Batman Who Laughs, who later uses him as his base. He serves as a major antagonist in Dark Knights: Death Metal.

This Batman is similar to the prime Batman like all other Dark Multiverse Batmen such as in this case having a son Damian Wayne and all his other allies. In this reality Bruce Wayne has grown old after his many years of crime fighting and so his son Damian Wayne became Batman to keep crime in check. Although it was apparent at one point that Damian couldn't be Batman properly , so Bruce took things into his own hands. He made a deal with the ancient Native American Bat god by performing a cultist ritual from the 17th century which told of greater rewards being met if sacrificing a one you hold dear. Since Bruce loved Damian he decided to lure him before then stabbing him to death for the ritual to work. This granted his soul to be merged with Gotham, making him a living city. Using this, he rid Gotham of all its rampant criminals. Albeit causing mass destruction

Later The Batman Who Laughs convinced him to join the Dark Knights and travel to conquer Earth 0. He agreed and to the shock of Nightwing and Batgirl, Castle Bat replaced Earth 0's Gotham in no time. Within a week Laughs had taken over the city and split it away from the Continental United States into its own respective continent.

During the time the three heroes Batman, Superman, and Wonder Woman came out of the Dark Multiverse, Castle Bat turns into a Batman avatar at the orders of Laughs who had become the Darkest Knight. His downfall though was when Lex Luthor used a Brainiac algorithm but modified to transfer his soul into a model Gotham city in a glass ball. He would have suffered for a much longer time if not for Harley Quinn who crushed the ball, ending Castle Bat's pitiful existence.

Castle Bat is the fear of the prime Bruce Wayne if he were to ever sacrifice himself and even Gotham City. So this version of him deeply cares about Gotham making him more affable but nevertheless delusional. From him killing Damian to stopping crime, it was all for the city Bruce deemed needed to be saved. This also being how he justified his need to commit mass destruction in his universe killing many in the process. Making himself in his own eyes the hero whilst doing this. Overall a delusional villain who genuinely believes to be on the side of good.

He has Unique Physiology, which means that he is made of all the materials made from the county that he merged with via ritual. In addition he has Shapeshifting, which allows him to mold himself into whatever he desires as seen with Castle Bat's Batman avatar. Some abilities displayed are his natural skills of business management, seeing that he is still a billionaire and influential person, Deception, as seen with Damian, and Occultism, seeing how he knew about the ritual in the first place. In addition, he has the Batsuit and Utility Belt, from his days as Batman. 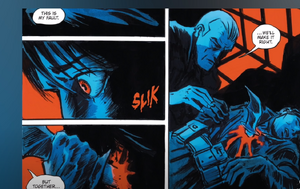 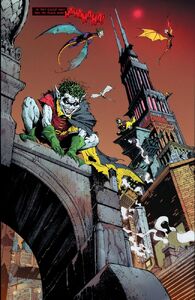 The Batman Who Laughs' headquarters. 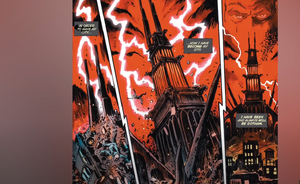 Retrieved from "https://villains.fandom.com/wiki/Castle_Bat?oldid=4141878"
Community content is available under CC-BY-SA unless otherwise noted.