Getting high on drugs.

Plot an attack in Los Angeles by planting a bomb in a location that only he and his brother Pollux are aware of (failed after deciding to deactivate it in order to avoid suspicion).

Ruin Sean Archer's reputation and life after switching faces with him (briefly succeeded until his death).

Castor Troy is the main antagonist of the 1997 live-action film Face/Off.

He is a terrorist who plans to threaten the citizens in Los Angeles a bomb attack in a city with the help of his brother Pollux, so that both of them could have $10 million. However, his plans got hindered when his rival Sean Archer tries to stop him from committing the attempted act.

He was portrayed by Nicolas Cage, who also played Mr. Brent Ryan in Mom and Dad, Peter Loew in Vampire's Kiss, Yuri Orlov in Lord of War, Speckles in G-Force, and Little Junior Brown in Kiss of Death as well as John Travolta, who also portrayed Vic Deakins in Broken Arrow, Billy Nolan in Carrie, Howard Saint in The Punisher, Vincent Vega in Pulp Fiction, Ryder in The Taking of Pelham 123, Gabriel Shear in Swordfish, Emil Kovač in Killing Season and Terl in Battlefield Earth.

Castor attempts to assassinate Archer at a carnival, but he fails and ends up killing Archer's five year old son, Michael, by accident. Consumed by revenge, Archer vows to bring Castor to justice.

Six years later, Castor and his younger brother/accomplice Pollux become a part of an extortion plot: They plan to threaten to blow up Los Angeles with a powerful bomb hidden in a secret location in order to get $10 million. As Castor and Pollux board a plane at a small airport, they are pursued by Archer and his FBI team. Archer shoots the planes engine, causing it to crash. Archer later corners Troy at a warehouse. Castor gloats to Archer about the bomb, but he is knocked into a coma before Archer can learn more, while Pollux is arrested.

Sean learns more about the bomb, but is unable to convince Pollux for the location. His friends suggest that there is only one way: To exchange his face for Castor’s own in order to infiltrate the prison where Pollux is and get the bombs location. Archer then undergoes face transplant surgery by Dr. Malcolm Walsh and is sent to the same prison where Pollux is. The procedure is only kept a secret to Archer, his two FBI colleagues, and Dr. Walsh.

Soon after, Castor awakes from his coma and discovers his face missing. He calls in his gang and force Dr. Walsh to put Sean's face on him. Castor burns the lab with Walsh and Archer’s FBI colleagues inside, erasing all evidence of the switch. Castor visits the prison and taunts Archer about what happened. Castor, as Sean, releases Pollux and forces him to reveal the bomb’s location. Disarming the bomb in a dramatic fasion, Castor gains the trust of Archer’s FBI colleagues. Castor also gets close to Archers family: He romances Sean’s wife, Eve, and saves Sean’s daughter, Jaime, from an attempted rapist.

Later, Castor learns that Archer has escaped from prison and has retreated to his headquarters. Castor, as Sean, attacks the headquarters. He confronts Archer, who later kills Pollux. The next day, Castor kills FBI Director Victor Lazarro. At Lazarro's funeral, Castor confronts Archer once again and takes Eve hostage. A gunfight later ensues and Castor takes Jaime hostage, but she retaliates by stabbing him with a knife he, ironically, gave her for self-defence. Castor kills two FBI agents and flees in a speedboat, but Archer pursues him and forces him into shore by collision. Archer then kills Castor with a spear gun and finally Archer gets his face back.

Castor Troy is a wanted terrorist-for-hire. He is machavellian, savvy, sadistic, psychopathic, and remorseless. He is also responsible for numerous bombings and many political assassinations. Castor has an arch-nemesis: FBI Special Agent Sean Archer, who has been pursuing him for a while. The origin of their animosity is unknown but it only gets worse after Troy accidentally kills Archer's son. Despite this, Troy is nearly friendly with Archer all the time he meets with him, even asking him to join him and his gang. However, it is not genuine since he has no problem trying to kill him when he refuses.

That said, Castor seems to have a bit of humanity in him. In addition of being shocked when seeing he has shot his son, he seems to have qualms against rape, as he defends Jamie, Archer's daughter, against her boyfriend from raping her. Nevertheless, he threatened Archer to rape Jamie earlier, sexually harassed a student of a choir and licked Jamie's face later, showing it is hypocrisy of his part. But for all this, Castor genuinely loves his brother Pollux, refusing to kill him when he learns that he revealed by accident their location to Archer and even paying the plane who takes him out of the scene. He was also clearly distraught of his death and even contemplating suicide for a moment to join him. 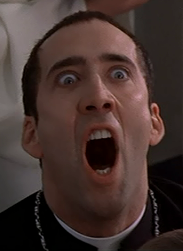 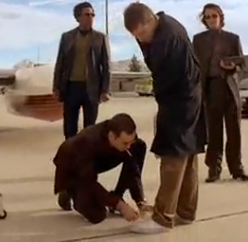 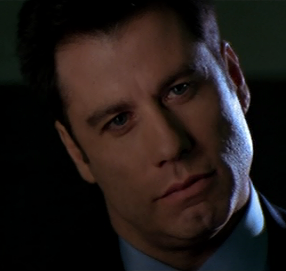 Castor with Sean's face and appearance.

Castor's demise as he is impaled with a harpoon. 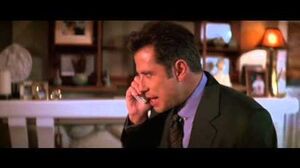 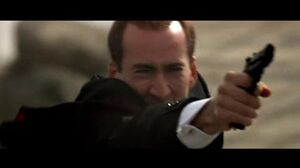 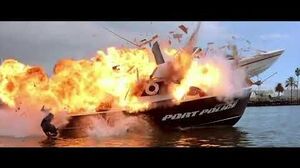