Villains Wiki
Register
Don't have an account?
Sign In
Advertisement
in: Tom and Jerry Villains, Organizations, Military,
and 15 more

The King of the Cats's Castle

Defeat Jerry and his friends.

Preserve the King of the Cats' dominion over the winter wonderland.
Enslave the toys (all failed).

The Cat Guards are the supporting antagonists of the 2007 direct-to-DVD film Tom and Jerry: A Nutcracker's Tale. They are a group of cats transformed into soldiers by the magic that brought the toys to life who serve the King of the Cats.

They were all voiced by Michael Donovan.

Tom is the captain of the Cat Guards and the central antagonist of the movie. He was sent out by the King of the Cats to lead the Cat Guards in pursuing Jerry and his friends. Unlike the other guards, Tom wears black likely to designate his status as their captain.

Butch served as Tom's apparent second-in-command among the Cat Guards and led them whenever Tom wasn't around. He often got on Tom's bad side, and as a result was beaten by Tom.

The fattest of the Cat Guards, he was tasked with bringing the cannon during the guards' mission to defeat Jerry and appeared to enjoy eating the most out of the cats.

He was the third most prominent Cat Guard, after Tom and the Black-haired Cat.

One of the cats Tom took with him to go after Jerry, he is distinguished from the other cats by his bright red nose.

He was mistakenly tied up by the other guards when they tried to capture Jerry and left behind after the guards realized their mistake and ran to pursue Jerry and his friends. He later reappeared during Jerry's attack to reclaim the kingdom with an army of toy soldiers and was chased out along with his fellow cats.

A grey-haired who spoke with a British accent and wore a bowler hat before being transformed into a Cat Guard. He was one of the guards who was brought along by Tom to go after Jerry.

He disappears from the group once Jerry and his friends make it to the Toy Maker, but later reappears during Jerry's attack to reclaim the kingdom from the King of the Cats. He can be seen being chased out by the guards.

A trio of young cats who accompanied Tom on his mission to go after Jerry. Unlike the other cats, they wore light-blue uniforms and peaked caps. Fluff is brown, Muff is black and Puff is orange. 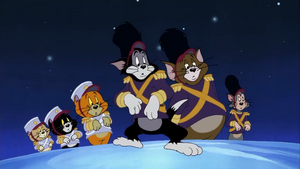 The Cat Guards looking for Jerry and his friends.