Killing members of their species on Purge Night (common folk of the species).

Living luxurious lifestyles in a huge mansion (elites of the species).

The Cat People are the main antagonists in the Rick & Morty episode "Look Who's Purging Now". They are an unnamed race of intelligent humanoid cats who populate the Purge Planet. There are the regular working class and the elite class that secretly manipulate and exploit the Purge event to their own benefit.

At some point in time, the Cat People evolved and became an intelligent species. The elites of their race created a Purge like event in order to diminish the working class and make it easier to control them while they continue their wealthy lives unthreatened by any opposition. Their descendants would continue this trend of their predecessors died. This pattern would continue until Rick Sanchez and Morty Smith arrived (although it is possible the Cat People still continued the Purge despite being free of their elite oppressors).

The working class members of the Cat People make their appearance when Rick and Morty arrive at their planet (after a large spacebug crashed into their windshield and they were out of wiper fluid). Coincidentally, the very same day they landed on Purge Planet was the day that The Purge festival was to be held. The first people they encountered were looking forward to the festival, but Morty was anxious to leave before it's beginning. However, Rick asks Morty if he wants to stay and watch the murderous activities.

They succeed in finding wiper fluid, and they depart as the sun sets, flying low over the surface of the planet as the Festival begins. Rick's enthusiasm for the Festival is quickly crushed by a particularly gruesome death, which sprays copious amounts of blood onto his windshield. As he vomits out his window, thoroughly disgusted by the sight, Morty sees a girl in trouble and demands of Rick that they save her; when Rick objects, Morty blackmails him into complying. Upon landing (on top of one of the girl's attackers), Rick enthusiastically begins shooting everybody who comes near them. Morty suggests that the girl, Arthricia, wait out the Festival in their ship, and Rick sarcastically agrees.

Arthricia complies and accompanies Rick and Morty and leads into an awkward silence. She suddenly freaks out and says that she forgot about her grandmother. Rick, Morty, and Arthricia then go to a ramshackle farmhouse, where, despite his misgivings, Rick follows Arthricia inside. She then double-crosses them and overpowers Rick, stealing his gun and shoots him with it, finally coercing Morty to surrender the ship. Apologizing to him, she flies away into the night, struggling with the controls. Moving inside the cabin, now on fire, Morty finds Rick wounded on the floor, and helps him out of the shack. A group of people advance on them but Rick is able to disintegrates one of them and they then surrender and give him their weapons.

Rick then contact Summer (who is arguing with Jerry) with one his phones at Beth's house. Summer is able to get it, which was between the sofa cushions. While Rick and Morty are still hiding in the shack and making a chemical solution to heal Rick's wound, Rick informs Summer and Jerry of their situation. While Rick and Morty are killing some of the Cat People that bursted into the cabin and Jerry asking if the person on the phone is Teddy Mason, Rick tells Summer to memorize a number. After killing the last intruder with a spoon (the only thing Morty threw to Rick when he asked for help) and berating Morty for throwing him "the one thing that can never kill anything", Rick tells Summer to find a red box over his workbench, take it outside, and enter the previously mentioned number into the box.

However, in order to set up a beacon for what Rick identifies only as a "package", Rick and Morty have to head toward a lighthouse, intending to assemble the beacon on the observation platform. They meet the owner of the lighthouse and consents only on the condition that one of them listen to one of his stories. While Rick heads to the top of the lighthouse, Morty agrees to listen to the story, which he discovers is a movie script. To pass the time, he decides to eat one of the two candy bars given to them by the person who gave them the wiper fluid.

Summer and Jerry go to the garage, where Summer retrieves the red box and places it on the floor, berating Jerry for his insistence on resolving his own issue as she inputs the numbers into the box. Upon the completion of the sequence, the box pops open, forming a launchpad for a large, silvery orb with a smaller red dot on its side. As Jerry continues trying to restore his dignity, the orb hurls itself through the ceiling into the sky, leading Summer to muse, "Oh...he might have said to take it outside."

On the observation deck, Rick finishes assembling the receiver, while down in the main room, the owner finishes reading to Morty, whose patience is wearing thin. After repeatedly asking Morty for his honest opinion, Morty says he has a problem with the way the story begins, and the owner, suddenly offended, responds by ordering them to leave. He mounts the stairs to tell Rick the same. Upon reaching the top, Morty reveals that he hated the entire story; when the owner tries to shut the receiver down himself, Morty pushes him down the flight of stairs in a fit of rage, killing him and leaving Rick astonished.

After leaving the lighthouse, the General Store Owner along with a group of purgers confront Rick and Morty as they were walking in a grassy field. They were quickly killed off by Rick and Morty once their combat suits had arrived. More cat people were killed by Morty when they arrived in town, even some who were merely hiding from purgers.

Rick and Arthricia later go into the mansion of the planet's ruler where they shoot everyone inside to take revenge for previous purge festivals and stop them from continuing another new purge festival (while listening to the song "Feels Good" by Tony! Toni! Tone). After this was done, the inhabitants of the nearby village were without leadership or economic systems. Before they managed to work out a basic trade system, they turned on each other, which resulted in the proposition to host an annual event to let out the murderous anger they all have pent up (continuing the same cycle all over again). Rick and Morty then leave and go back home on Earth.

Mansion occupied by the elites of the Cat People species

General Store Owner along with a group of purgers 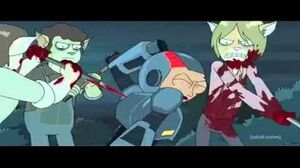 Rick and Morty - Time To Purge 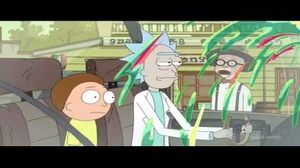 Rick and Morty - The Purge 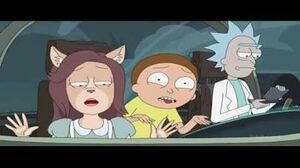 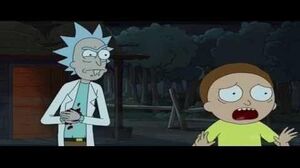 Rick and Morty - Rick Gets Shot 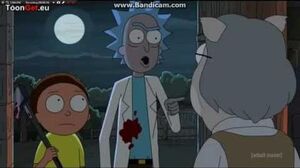 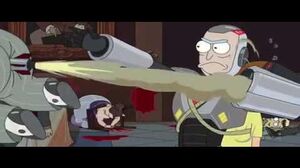