Betraying and killing her boyfriends.

She is a criminal in Red County in GTA San Andreas and later the leader of the Colombian Cartel in GTA III. Additionally, Catalina is also the cousin of Varrios Los Aztecas leader Cesar Vialpando and Claude's ex-girlfriend-turned arch-nemesis.

She was voiced by Cynthia Farrell.

After arriving in Liberty City, Catalina begins discussions with and becomes the leader of the Colombian Cartel and, with some of their members (including Miguel) rob a bank in the city. After robbing the bank she shoots Claude, leaving him for dead, and explaining that he is 'small-time'. She continues her criminal activities with the Cartel, increasing the production of SPANK and attacking the Yakuza on Staunton Island and the Leone Family on Portland. During this period, Claude managed to escape from an LCPD convoy with, unintentionally, help from the Colombian Cartel (who were seeking to capture the Old Oriental Gentleman) and began working for Leone made man Luigi Goterelli.

Claude later flees to Staunton Island and begins to work for Yakuza co-leader Asuka Kasen who begins to attack the Cartel following the near death of her brother Kenji at the hands of a 'Cartel assassin', which was really Claude working on orders from Donald Love. Love later sends Claude to collect a package from a construction site in Fort Staunton, where he once again meets Catalina and Miguel, with Catalina shooting Miguel in the back and escaping with the package. Asuka, desperate to exact revenge for her brother's near death, begins to torture Miguel for information, with Claude then using the information to attack Cartel interests, including destroying stands selling SPANK run by the Uptown Yardies.

Catalina, however, strikes back and murders both Asuka and Miguel, and kidnaps Maria Latore, using her as a hostage and demanding a $500,000 ransom be brought to the Cartel headquarters in Cedar Grove. Claude decides to take the ransom money to Catalina and manages to escape an ambush, set up by Catalina, who escapes in a helicopter and keeps Maria hostage. Claude follows Catalina to Cochrane Dam, where he destroys the helicopter with a rocket launcher, killing Catalina and severely weakening the Cartel.

Catalina is portrayed as an extremely reckless, violent, mean, greedy, psychotic, quarrelsome, and hypocritical woman who turns on even close partners if they cease to be useful to her (as seen with Carl Johnson, Claude and Miguel). Much more of Catalina's psyche is brought to light during her conversations with Carl Johnson, frequently shooting bystanders during heists and referencing cannibalism.

She also suffers from a persecution complex, possibly due to cruel treatment by her stepfather as a child, telling Johnson that "They had to die because YOU were slow and stupid, like a big fat brat that eats chocolates while his father gives nothing to his stepdaughter but stale bread!". 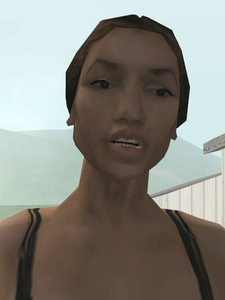 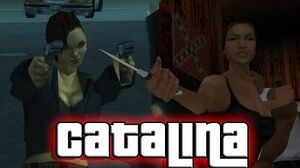