Kidnapper
The Catfishstress is a one-time villain from the Spongebob Squarepants comics. She appeared in the comic book issue, "Claws of the Catfishstress". She is a female catfish with a mustache, who's in love with Mermaid Man and wants to convert him to evil and make him her lover/partner in crime. 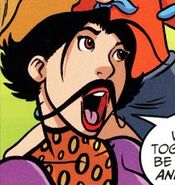 Catfishstress unmasked.
Add a photo to this gallery
Retrieved from "https://villains.fandom.com/wiki/Catfishstress?oldid=3573340"
Community content is available under CC-BY-SA unless otherwise noted.