Head of the Braithwaite family

She was voiced by Ellen Harvey.

In 1899, the Van der Linde gang had stolen a shipment of liquor from the Braithwaite family. Leading members Hosea Matthews and Arthur Morgan sell the liquor back to the Braithwaites, who offer them and their leader Dutch van der Linde work. She tells them to sell the moonshine at the saloon in Rhodes to advertise their product, where they are eventually ambushed by Lemoyne raiders who were hoping to buy the moonshine from Catherine herself.

Later, Catherine has Arthur and Sean MacGuire sneak onto the Gray's manor and burn down their tobacco fields in order to permanently put them out of business.

Eventually, she ends up double-crossing Dutch's gang and kidnaps John Marston's four year old Jack before selling him to Saint-Denis crime boss Angelo Bronte. In retaliation, Dutch and his gang raided the mansion, killing both of Catherine's sons as well as the rest of her bodyguards and setting her mansion on fire, before Catherine revealed Jack's location. As Dutch and his gang left the scene, Catherine ran back into her mansion in distress where she was burned alive.

Being a wealthy deep southern woman in the late 1800's, Catherine Braithewaite is an egotistical and proud person, believing herself to be superior to most others and especially those she considers "Yankees" since her home was a former confederate slave plantation.

Catherine also had no qualms at all with betrayal and even kidnapping small children in order to get her revenge on Dutch and the rest of the Van der Linde gang, proving she is incredibly vindictive. 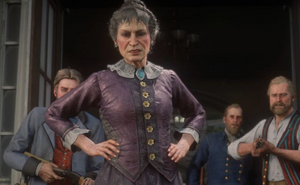 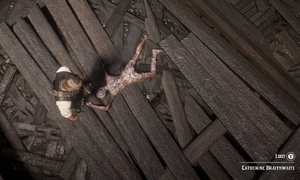 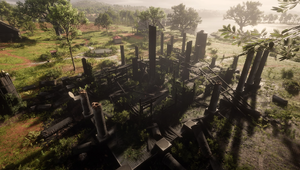 The remains of the Braithwaite manor after being torched to the ground by the Van der Linde gang.