Build a Stained Glass Picture of His Asshole

Dark Priest
The Catholic Priest is a one-time villain from the Netflix original series, Paradise P.D., only appearing in the episode "The Father, The Son, and the Holy Post-It Note". He is a greedy priest of a Catholic Church, who violently fought with The Legion of Dooooom over a bunch of money.

He is voiced by Roger Black.

In "The Father, The Son, and the Holy Post-It Note", Thester accidentally lost ownership of all the money that funded Operation DD and it went to Miss Geraldine, who then donated the money to the Catholic Church. Fitz and The Legion of Dooooom went down to the church and demanded their money back. The Catholic priest stood there with the money and told them to "lick his mossy Irish taint." Infuriated, Fitz threatened him to give the money back but the Catholic priest still refused, saying that he was going to use the money to build a stained glass window of him bending over and showing off his puckering anus so that The Legion of Dooooom would have something to kiss. Fitz challenged the priest to a fight and the priest more than happily obliged, taking out his thurible and using it the way one would use a medieval flail. Fitz ordered his minions to attack the priest but they were too afraid to do so, as they were faced not only by him but an army of nuns, that surrounded them. Before long, the priest and his nunnery beat the holy shit out of everyone in The Legion of Dooooom and kicked them out of his church, telling them to never come back.

The Legion of Dooooom returned for another fight with the priest. This time, they came backed up with Jesus Christ, who kindly asked the priest to give The Legion of Dooooom their money. The priest dropped to his knees in prayer and begged Jesus to do him one favor first. When asked what it was, the priest suddenly reared his ugly head and told Jesus to crucify himself on the cross and pogo his way out of the church. Jesus was greatly thrown off, saying that he was Jesus Christ, his own lord and savior. The priest rationalized that at Disney World, Mickey Mouse is also the idol around there but he doesn't call the shots. With that being said, the priest once again, summoned his nun army and they all beat Jesus and The Legion of Dooooom shitless and threw them out of the church. This time, however, Jerry managed to swallow the money, while the fight was happening without anyone noticing. So when everyone was kicked out of the church, Jerry barfed up the money, proving to his teammates, that they had won the fight. 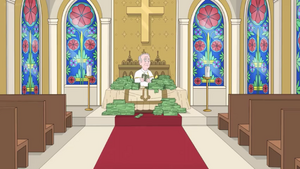 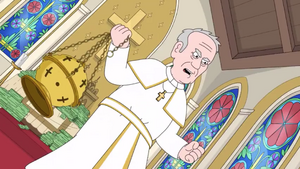 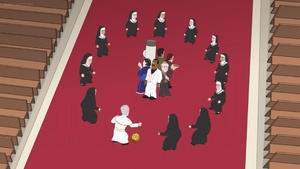 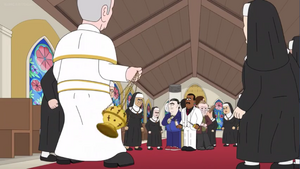 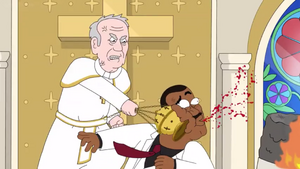 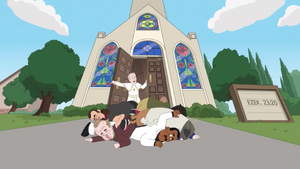 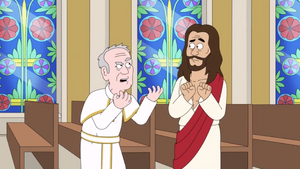