Cathulhu is a antagonist who appears in The Real Ghostbusters cartoon series, specifically as also the titular main antagonist of the episode entitled "The Collect Call of Cathulhu". He is a homage to Cthulhu but many of the Lovecraftian themes were toned down to keep in with both the more comedic Ghostbusters world and the family-friendly image of the cartoon.

The Great Cathulhu as he is sometimes called, is a member of a demonic group of extradimensional creatures called Old Ones, a race of beings beyond classification and who, in Egon's words, made Gozer look like "little Mary Sunshine". He is too powerful to be scanned and as such is arguably the most powerful supernatural entity the Ghostbusters have ever faced, his only weakness seemed to be powerful magic and the Ghostbusters also found a way to harm him via using their particle streams to ionize a roller coaster track, causing lighting to strike it, effectively sending 100 giga volts of electricity though it, yet even this didn't kill Cathulhu, as it simply put him back into his slumber.

Cathulhu was served by the[ [Cult of Cathulhu]] that sought to bring him out of slumber and end the world (and almost succeeded) as well as demonic minions known as "Spawn of Cathulhu". Like their master, these elements are very Lovecraftian, another striking homage to Lovecraft was the means by which the cult ultimately summoned Cathulu, the evil book known as the Necronomicon.

Cathulhu physically resembles a reptilian humanoid with bat like wings and an octopus head. Or as Peter Venkman put it, "looks like Godzilla wearing an octopus hat". 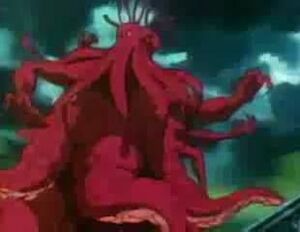 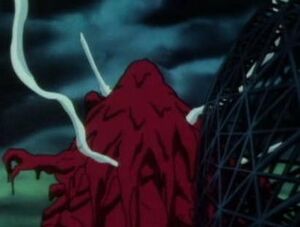