Kill Katniss Everdeen and Peeta Mellark in order to win the Hunger Games and to bring pride to his district (all failed).

Cato is the main antagonist (alongside President Snow) of the novel The Hunger Games and its film adaptation of the same name. He is a voluntary tribute from District 2, alongside with his district partner Clove.

He was portrayed by Alexander Ludwig, who also portrayed as Jameson from Final Girl.

Cato is extremely arrogant, savage, cold, cruel, sadistic, destructive, ruthless, and violent to an extreme. He has been trained his entire life in the Career Academy to become a ruthless and powerful warrior and survivor. He is highly intelligent, which is uncommon among most Careers who rely on strength and brutality. This is show in the climax of the film, where he strategizes how, in his fight with Katniss and Peeta, if Katniss shot him then both boys would be killed as a result. In spite of his intelligence, Cato is extremely prone to explosions of violence, where he becomes incredibly aggressive and even snaps a person's neck to vent his rage. He is also very impulsive, climbing a tree to chase Katniss, not taking into account his enormous weight. Cato is very vengeful, swearing revenge on Thresh for killing Clove, and becoming obsessed with killing Katniss for outshining them in the private training scores. This implies that he was in a relationship with Clove before they entered the Arena.

However, during the brutal climax of the film where he fights with the film's protagonists, he reveals an unexpected twist of character. He explains how he realizes that he was never going to survive the Hunger Games, in spite of his incredible strength and training - he was little more than an overconfident gladiator in the Arena, fighting and killing for the entertainment of the Capitol. He even acknowledges his mistakes, taking into account that this epiphany had only come to him whilst fighting Katniss when it was just the three of them surviving. Nevertheless, he shows determination to finish one final kill to bring pride to his District - even if it means he wouldn't survive the consequences. Cato is extremely brave and utterly persistent, as even after he was removed from the fight atop the Cornucopia, he continued to fight against the wolves with every breath that he could muster. Despite this, Cato is still capable of pleading, as he begs for Katniss to shoot him whilst he is being attacked by the wolf mutts.

Cato comes from District 2 and has been training for his entire life to win the Hunger Games. At age of sixteen (eighteen in the movie), he volunteers for the 74th Games and travels with his district partner, Clove, to the Capitol. During the opening ceremonies, he and Clove wear gold Roman themed armor, representing their district industry, military.

During the training, Cato soon joins other Career Tributes, Clove, Marvel and Glimmer, and spends much time with them. They laugh at other tributes when they show weakness, like at Peeta until he shows his true strength, surprising them all. Cato shows great fighting skills with swords and spears, making him as deadly an enemy as Clove. In the film, he gets angry and blames the District 6 male for taking his knife, which was really stolen by Rue. The two start arguing and Cato threatens the boy that he will be his first target. At the end, Cato receives a training score of ten points.

In the arena, he forms an alliance with the other Careers to kill the rest of the tributes. In the Cornucopia bloodbath, he delivers the goods and kills the District 6 male at first. He then fights the District 4 female, hitting her three times with a baton and throwing her into the crate. When Cato sees the injured District 5 male, he finishes him with a sickle. Cato then enters the Cornucopia, finding the small District 4 male there. When the boy attempts to escape, Cato quickly slashes his throat.

Later, Cato and the other Careers are joined by Peeta and, in the book, the District 3 male and the District 4 female as well. Together, they walk through the arena, killing other tributes. They soon find the District 8 female, who foolishly made a fire at night, and therefore, was easy to find, and Cato severely injurs her, with Peeta giving her a mercy killing afterwards. In the movie, Cato gives his sword to Glimmer who then attacks the girl.

The Careers later bump into Katniss and chase her up a tree. After Cato unsuccessfully attempts to climb up, they decide to wait under the tree until she comes down. However, she throws down tracker jackers nest, forcing Cato and his partners to escape.

Katniss and Rue then form an alliance and plan to destroy the supplies that the Careers have at the Cornucopia. Rue successfully lures them away and Katniss manages to blow all the supplies up with some unintended help from Foxface, who indirectly distracted the Career guard. When Cato discovers it, he gets angry and kill one of his allies, the District 3 male, by snapping his neck, while Clove tries to calm him down.

Due to Marvel's and Glimmer's deaths, the only living Careers are Cato and Clove now. They show up again at the Feast with a plan, which involves Clove going in for their District 2 backpack with Cato covering her. However, when Thresh kills Clove, Cato hears her screams and runs towards her, begging her to stay with him, but it is too late. Thresh also takes both his own and Cato's backpack, knowing Cato would pursue him instead of Katniss. After several days, Cato confronts Thresh, the two Tributes fight and Cato eventually kills him as a revenge for killing Clove. In the film, however, Thresh is ripped apart by the Wolf Mutts.

On the last day of the Games, the Wolf Mutts suddenly appear in the arena and start chasing Cato. When Katniss and Peeta see him running towards them, Katniss shoots an arrow at him, but it is bounced by an armor he is wearing. As he ignores them, the two realize something is wrong when the Mutts attack them. Katniss and Peeta manage to climb up the Cornucopia, but Cato is already there. In a senseless rage, Cato fights the two of them in a violent showdown, and easily wins due to his superior strength. He attacks them with his baton and sword, but is deprived of both of them. Ge is able to keep Katniss's bow at bay at the same time, nd is nearly overpowered by Peeta's strength, but he quickly overcomes this due to his actual combat experience. He starts choking Peeta, knowing Katniss can't shoot him without Peeta falling to the Mutts, too. In the film, Cato gives a climactic speech about being a pawn of the Capitol and states that he only wanted to bring pride to his district, saying all he knew how to do was kill, and even if, which he had only just realized, it was only for the entertainment of the Capitol. During this, Peeta draws an "X" in blood on Cato's hand with his finger. Katniss then shoots her arrow into Cato's hand, forcing him to release Peeta and fall to the Mutts.

At first, Cato attempts to fight them, as it sounds like he attacks them with a sword or a knife. However, after a long time he is too exhausted to defend himself and they manage to bite him, tearing his flesh brutally. Unfortunately for Cato, they can't kill him due his body armor and leave the savagely-bloodied boy in Cornucopia. After hours Katniss and Peeta are forced to listen to his moans of pain and despair, Katniss decides to use her last arrow to end his suffering. Before shooting him through his skull, a gnawed and bloody hunk of meat which used to be Cato mouths "please" to her. In the film, Cato doesn't suffer for a long time, as Katniss shoots him into his heart just after he falls down. 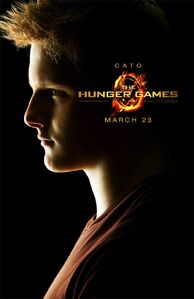 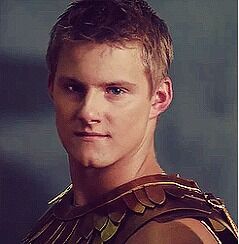 Cato after finishing his training for the Games, also his evil grin. 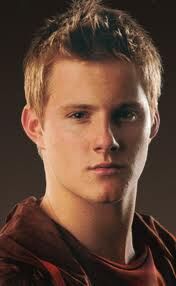 Cato in a promotional photo,
Add a photo to this gallery

Retrieved from "https://villains.fandom.com/wiki/Cato?oldid=4085038"
Community content is available under CC-BY-SA unless otherwise noted.