Keep an eye on her slaves.

Catrina is an orange anthropomorphic feline witch and the titular main antagonist (before redeeming herself) in the 1985 My Little Pony TV special "My Little Pony: Escape From Catrina".

She was voiced by the late Tammy Grimes.

What little we see of her background, she was in love with her future henchman Rep, and the two enjoyed traveling the land and playing around. At some point she found the Witchweed Potion, which changed her for the worse.

Catrina herself is a powerful witch who is dependent upon the Witchweed Potion, which is the source of her power. She holds the Bushwoolies as slaves and forces them to make the potion for her.

She was defeated by Rep after she promised to give up on her evil ways and redeemed herself by destroying the machine that produces the Witchweed Potion, not breaking her promise after being saved from certain doom.

According to Rep, Catrina was once cute, cuddly and sweet, but was changed after taking the Witchweed Potion, growing cold and bitter, and extremely tyrannical towards his potential slaves, like the bushwoolies and the ponies.

Her addiction to the potion only worsened things, as she became capable of threatening others' lives to continue producing what made her stronger, even harming her former loved one Rep.

In her normal state, Catrina showcases superhuman strength, being able to lift up baby ponies without effort and send Rep flying several meters away. She's also presumably quite intelligent, if she built the machine that makes her potion.

After taking the Witchweed Potion, she grows to immense size and becomes a powerful magician, able to create strong gusts of wind, shoot lightning out of his eyes and start a snowstorm. Doing like this only requires a single droplet of Witchweed Potion, though it lasts a few minutes.

However, like every other antagonist with the exception of the Smooze, she was helpless against the Rainbow of Light.

Catrina and Rep sing about the past

Catrina unleashes her powers on the ponies 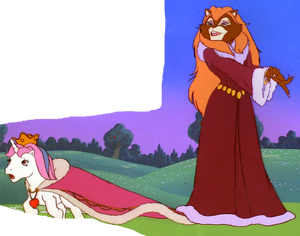 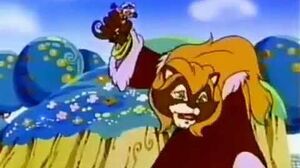 Those good (Before you went bad) Old days