The Legend of Lobo

Opportunistic Poachers
The Cattlemen are the main antagonists of Disney's 1962 live action film The Legend of Lobo, which is based on the 1898 book Lobo the King of Currumpaw by the late Ernest Thompson Seton. They are a pair of ranchers from Currumpaw who want to kill Lobo and his family for killing their cattle.

The cattlemen have first been encroaching on Lobo's native habitat for years and the wolves were forced to feast on their livestock as a result. El Feroz, Lobo's father, has been frequently hunting livestock and avoiding capture by the local cattlemen and they desperately want to capture them.

When Lobo is 6 months old, he starts to hunt with the family pack. But rather than buffalo, the wolves' prey are the herds of cattle being driven across the desert after the cattlemen wiped out the buffalo population. The cattlemen arrive at the scene and shoot at the wolves. A chase is ensued and the cattlemen manage to shoot Lobo's mother. As she limps away, the cattlemen notice her tracks and eventually find her. They corner her and kill her as the other wolves watch. The wolves proceeded to attack more cattle and the two cattlemen decide to use one of their calves as bait to lure El Feroz into their trap. El Feroz came across the calf and realized that something was wrong, but he got caught in the trap. Lobo came to his side and was forced to flee as the riders came back.

When Lobo becomes the new pack leader, they continue to prey on the cattle that have replaced the buffalo, but is wise enough to avoid all signs of the angry cattlemen who post rewards for his capture. Lobo and his pack kill so much livestock to the point where the cattlemen were determined to have him killed for a $1,000 reward. When the time comes for his pack to split up to mate and raise their pups, Lobo and his mate find a uniquely secure den in an abandoned dwelling that is accessible only by a precarious bridge.

As Lobo continues to feed on their property, the cattlemen's feud with him escalates. To catch the wolves, they hire a professional hunter named Tannerey with his pack of tracking hounds. Tannerey notices Lobo and Sombra and gives chase. The two wolves manage to escape on a bridge leading to their home, but unfortunately, the hunter realizes this and decides to set a trap near the bridge.

Tannerey comes back to see if Lobo had been caught, but Sombra had been caught instead. He decides to put her down, but realizes that he can use her as bait and lure Lobo into his trap. Lobo tracks them down and arrives at the farm, where Sombra is locked in a shed. Tannerey finds Lobo and shoots at him, but he escapes. Lobo leads his pack to create a cattle stampede, a diversion that enables him to rescue his mate and strike out for unsettled territory. In spite of the dramatic victory, Lobo realizes the same thing his father did: humankind has encroached too far on the territory that used to be his, and his best course of action is to seek a new home. 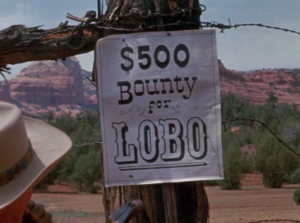 The Cattlemen placing a bounty on Lobo. 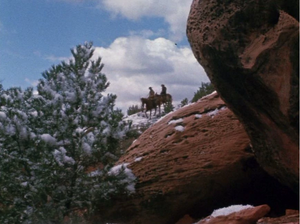 The Cattlemen hunting down Lobo. 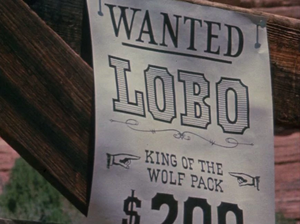 The Cattlemen's wanted poster for Lobo. 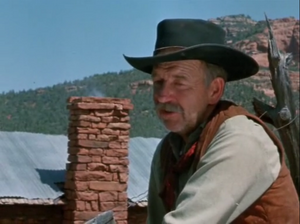 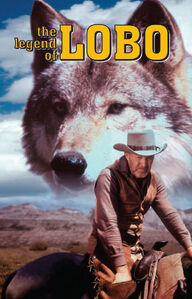