Caturamon is an Ultimate Level Digimon that resembles a blue armored monster-like dog. He also has the ability to shape-shift into a hammer.

Caturamon works for Zhuqiaomon, and the leader of the Devas.

After Beelzemon had defeated Infermon and absorbed his data, Caturamon ordered him to destroy the Tamers and later brought him to the Tamers. During the Juggernaut storm and after Beelzemon retreated, Caturamon arrives and attacks the Tamers with his Howl of the Heavens attack and manages to kidnap Calumon and bring him to the Sovereign.

Later, during the battle against Gallantmon and Beelzemon, the Digimon Sovereign orders Caturamon to destroy the traitorous Lopmon (originally Antylamon). Caturamon discovers that Lopmon was Suzie’s partner, and disgusted by this, he attacks them with his Treasure Mallet attack, but Terriermon took the attack and was injured while Renamon rescues them. Caturamon corners an arriving Gallantmon, and was destroyed by Gallantmon’s Lightning Joust attack. He screamed his last words during his death, “LONG LIVE THE SOVEREIGN!”, and Beelzemon took advantage of his proprietor's death by absorbing his data (it's implied he had been planning on doing this at some point himself, as he called Caturamon a filthy dog, and said he'd gotten what he deserved), and giving him a power boost in the process.

Apparently he competes with Makuramon for praise from their master and detests humans just as much as the other Deva with Lopmon being the exception, as he voiced his disgust while Suzie Wong clung to Lopmon.

He serves the Four Holy Beasts member, Baihumon, he is one of the Twelve Devas. He serves as leader of the Devas, because he has the personality that if he cannot point to something clearly, he won't act on a hunch. He can change into the "Treasure Mallet". 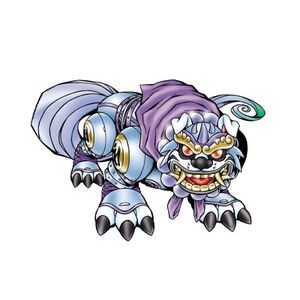 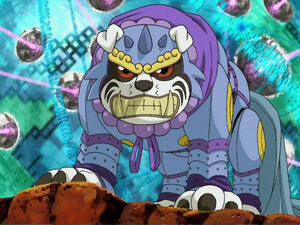 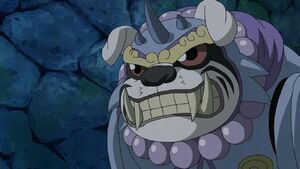