Catwoman is a supporting antagonist in the 1960s Batman TV series and in the 1966 film.

She was portrayed by Julie Newmar in the show's first and second seasons, and by the late Eartha Kitt in the third and final season (who would later voice Yzma from The Emperor's New Groove). Lee Meriwether portrayed Catwoman in the 1966 film (which played in theatres in between Seasons One and Two) due to Newmar being unavailable at the time to play the role.

This version of the character was given neither a background nor an alter ego, but focused instead on her costumed aspects. The costume created for the series was similar to the green catsuit appearing in the comics at the time, though it was constructed by Newmar from black Lurex fabric. One of these costumes tailored for Newmar is part of the collection of the Smithsonian Institution. 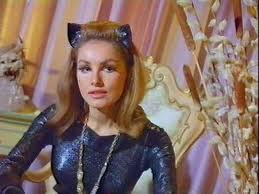 Retrieved from "https://villains.fandom.com/wiki/Catwoman_(Adam_West_Batman)?oldid=3483125"
Community content is available under CC-BY-SA unless otherwise noted.