Batman: Return of the Caped Crusaders

To defeat the Dynamic Duo (failed), convert Batman into a bad guy (succeed), open his own club (succeed), inject her antidote to Batman from his trance (failed), release several villains from prison for defeat Batman (succeed), defeat the Penguin, the Riddler and the Joker (succeed), escape with Batman to Europe for drink a coffee (failed), kill Robin (failed)

Femme Fatale
Catwoman is a supporting antagonist and later tritagonist of the 2016 animated film Batman: Return of the Caped Crusaders and an anti-hero in the 2017 sequel Batman vs. Two Face.

She is a criminal that tries to conquer Gotham City, but her plans were always foiled by Batman and Robin, the Dynamic Duo. She is based on the Catwoman of the 1960's Batman TV show.

She was voiced by Julie Newmar, who also portrayed the 1960's Catwoman.

After a heist in Gotham Palace and tying up the public along with Joker, Riddler and Penguin, Catwoman boarded the Jokermobile to reach a chemical factory and stole the Duplicator Ray.

Batman and Robin tried to stop her and the Joker's minions, but she distracted Batman and after knocking him out, she escaped along with the other villains to a frozen food factory. Once there, she tried to make Batman a bad guy with her Bat-Grass, without apparent success. But the Dynamic Duo escaped.

After leaving the factory, Catwoman and the other villains used a U.S. rocket to reach a space station built by Russia and the United States. However, once there, the Joker, along with Riddler and Penguin, betrayed her, thinking that she would betray them because of her love for Batman.

The Joker locked her into a special room and ejected her into space to kill her, but the Dynamic Duo saved her. After this, she witness Batman's fight against her three old partners in crime, leaving them unconscious.

After this, Catwoman was presumably taken in custody once again. During the time in which Batman became evil (because the effects of her Bat-Grass develop slowly), she escaped from prison and opened her own club. However, she accepted for help Robin to save Gotham City from Batman's madness. Once inside the Batcave, she injected Batman with her antidote for the effects of the Bat-Grass.

However, her antidote didn't work as Batman prepared and injected himself a Bat-Anti-Antidote, and tied Catwoman along with Robin and tried to execute them in a radioactive generator, but he first kissed Catwoman as her last wish. However, after Batman left the Batcave, Catwoman was rescued by Robin.

After this, Robin and Catwoman disguised themselves as inspectors and helped the villains of the state prison, like the Mad Hatter and Falseface, to escape with flying peaks and balloon shackles, except the duplicates of Joker, Riddler and Penguin. After the escape, Catwoman and Robin conducted the villain army into Gotham Palace to defeat Batman and his army of Batmans. However, they were defeated by the Batman army, but the real Batman was finally saved by the unemployed Alfred Pennyworth with a champagne antidote.

After this, Commissioner Gordon and Chief O'Hara appeared to take Catwoman into custody, but she discretely escaped from the police and decided to help Batman and Robin to stop the Joker, the Riddler, and the Penguin. After locate the criminals and their respective gang, the Dynamic Duo and Catwoman boarded the Penguin's Blimp and defeated their minions and Riddler and Penguin. After Joker's failed attempt of escape, Catwoman decided to steal the artworks stolen by the three villains, but Batman tried to convince her to abandon her bad side.

Catwoman proposed her escape to Europe, for drink to coffee and kill Robin, but as Batman's refused, she returned the artworks to the Dynamic Duo and dropped herself into the chemical factory's chimney. It's currently unknown if she survived or not. 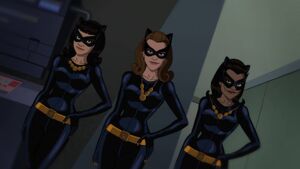 The two incarnations Catwomen of Lee Weriwether or Eartha Kitt with the film's main incarnation Catwoman of Julie Newmar.
Add a photo to this gallery

Retrieved from "https://villains.fandom.com/wiki/Catwoman_(Batman:_Return_of_the_Caped_Crusaders)?oldid=3774773"
Community content is available under CC-BY-SA unless otherwise noted.