Get revenge on those who harassed and belittled her (briefly succeeded).
Ransack her apartment in destroying every household belonging that she gets her hands on (succeeded).
Avenge her supposed death (succeeded).
Assist Penguin (formerly).
Be with Bruce Wayne (failed).

Selina Kyle, also known as Catwoman, is the anti-heroic deuteragonist of Tim Burton's 1992 superhero film Batman Returns, the second installment of the Burton/Schumacher Batman film quadrilogy and returns in the Batman '89 comic miniseries.

She was a lonely, frustrated woman pushed over the edge into obsession and crime after her boss, tycoon Maximillian Shreck, tried to kill her to keep her from revealing his plot to build a power plant that would steal Gotham's electricity.

She was portrayed by Michelle Pfeiffer, who also played Velma Von Tussle in Hairspray, Eris in Sinbad: Legend of the Seven Seas, Lamia in Stardust, and Queen Ingrith in Maleficent: Mistress of Evil.

Selina Kyle worked as a secretary for the powerful and ruthless Max Shreck, owner of a business empire and the department store Shreck's. Despite being a secretary, Selina fancied herself as more as an executive assistant, since she helped out in more ways than a mere secretary. On Christmas Eve, Shreck forgot his speech and Selina tried to take it to him, but the city came under attack by the Red Triangle Gang and she herself was taken hostage by one of the clowns. Batman intervened and saved her by knocking the clown out. Selina instantly became fascinated with Batman, who took his leave. She took her defeated clown captor's taser home as a self-defense weapon.

At her flat, things were no better. Selina listened to unpleasant messages on her answering machine: the first from her parents, who express disappointment at Selina not going home for Christmas; the second from her boyfriend, who had decided to go on a Christmas holiday on his own on advice from his psychologist; and the third from herself, reminding her that she has to go back to work and prepare documents for Shreck's meeting with Bruce Wayne, something she herself had anticipated she would forget.

As she went through the files, Selina inadvertently discovered that Shreck's proposed Power Plant would suck power from Gotham City and store it, effectively bringing Gotham under control of the Shreck family. Shreck himself appeared and confronted her about this information, and though Selina swore that she would not let it slip, Shreck pushed her out of the window to silence her.

Selina fell through several red awnings on the side of the building, suffering only a mild concussion when she finally hit the street. She was mysteriously awakened by alley cats and returned home in a daze. When her answering machine gave an advert on a perfume sold by Shreck, Selina appeared to suffer a psychotic break: ransacking her apartment, destroying her possessions, and sewing a homemade cat costume in preparation for her revenge on Shreck. Calling herself Catwoman, Selina became a vigilante in her own right; on her first night, she brutally beat a mugger for trying to rape a helpless woman, but then chastised the woman for being unable to defend herself.

The next day, Selina appeared in Shreck's office while he was speaking with Bruce Wayne, covered in bandages and sporting a more confident and assertive attitude, somewhat impressing Shreck. Selina feigned amnesia and an instant attraction developed between herself and Bruce.

A few days later, during an attack on the city by the Red Triangle Gang, Catwoman blew up the bottom floor of Shreck's store, bringing her into conflict with Batman. In the ensuing fight, Catwoman stabbed Batman in the abdomen (not severely), while Batman napalmed Catwoman's arm and knocked her into the back of a truck hauling sand, narrowly escaping death a second time. In response, Catwoman joined forces with The Penguin to destroy Batman, and the two came up with a plan to frame him for kidnapping the Ice Princess and killing him by turning his Batmobile into a bomb.

Meanwhile, whilst in the city, Selina came across Bruce and the two talked for a while before Bruce invited her for an early dinner at his house. Over dinner, Selina and Bruce spoke about Bruce's personal life, and Bruce revealed that he had trouble with his previous girlfriend, Vicki Vale, over his apparent difficulty with duality. Once Bruce makes it clear that he and Vicki were finished, Selina leapt on him and the two started kissing passionately. Their attempts to become more intimate resulted in almost exposing the other's injury and they abruptly stop. Just then, they saw a news bulletin about the Ice Princess's kidnapping with Batman the apparent culprit. As Bruce excused himself in order to suit up, Selina left and gets into her costume to carry out their plan

Catwoman and Batman arrived at the same time and briefly fought before Catwoman forcibly dragged the Ice Princess to the building's roof. To her shock, the Penguin had engineered the Ice Princess to fall off the building while making it look as if Batman pushed her. When Batman was shot by the police and injured from a fall, Catwoman approached him and pinned him down, straddling his chest. She flirted with him for a bit, before they noticed they were laying under some mistletoe and she gave him a long seductive lick from his chin to his nose, as a cat-styled kiss. After she briefly mocked him by saying how every girl Batman tries to save ends up dead, referring to herself and the Ice Princess, and that maybe he should retire, she slowly started to get off him before suddenly grabbing him and trying to stab him again, but he kicked her aside and leaves.

Later on, she rejected an advance from the Penguin, who responded by tying her neck to a helicopter umbrella. Though she managed to free herself, she luckily only took a short fall into a greenhouse directly across from her apartment window. Saved by landing on a bed of roses, her costume had been torn to shreds.

With her alliance with the Penguin shattered, Selina devised a plan to kill Shreck herself at his annual Maxquerade Ball with a concealed gun. She encountered Bruce at the ball and they danced for a while before she revealed her intentions to him. In the process, they discovered each other's identities, but before they could leave to talk outside, the Penguin attacked and revealed his plan to kidnap the firstborn sons of Gotham, taking Shreck himself hostage.

Catwoman found Shreck trying to escape from the Penguin's lair and confronted him, ready to finish him off. Batman intervened and requested that they hand him over to the police, but Catwoman objected on the basis that no jury will ever convict Shreck.

Batman unmasked himself as a sign of peace and implored Selina to abandon her vendetta and live with him in Wayne Manor, but Selina refused, determined to end things there and then. Shreck drew a gun and shot at Selina four times, but ran out of bullets. Only shot in the shoulder and sides of her legs, she contented to approach Shreck. With "two lives" remaining, she held out her stun gun in front of her open mouth, before placing it under Shreck's chin as she gave him a deadly kiss of death. During she pulled a power cable wither other arm, causing a massive explosion in the generator. In the aftermath, her body is nowhere to be found, but it is later revealed that she survived (with her suit repaired) as she is shown looking up at the Bat Signal in the movie's closing scene.

Selina presumably left Gotham after this, and left her cat, Miss Kitty, with Bruce as a farewell gift.

Catwoman appears to have nine lives like a cat, narrowly escaping death eight times in the course of the film: 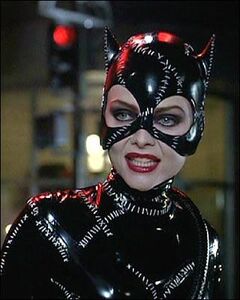 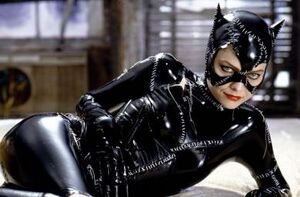 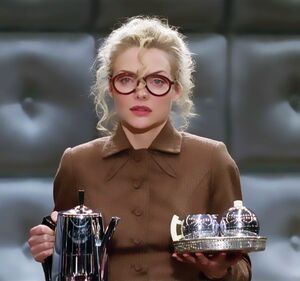 Selina Kyle before she becomes Catwoman. 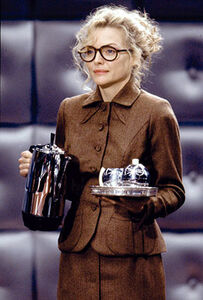 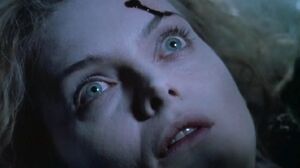 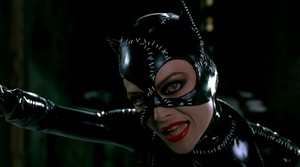 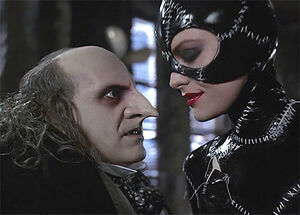 Catwoman forms an alliance with Penguin. 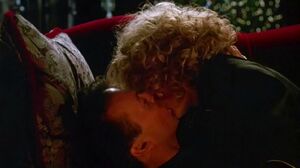 Bruce and Selina on a date. 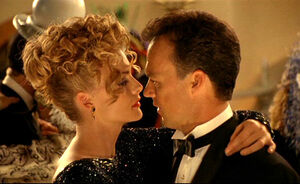 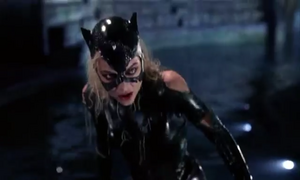 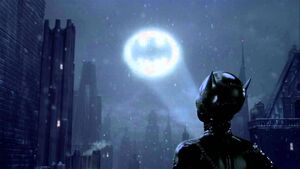 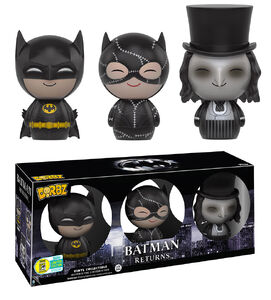 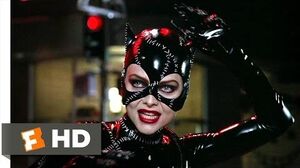