Thief leader
Selina Kyle (also known as Catwoman) is one of the major antagonists in DC Super Hero Girls. She is also sometimes an anti-hero in the series.

She steals an amulet that keeps Ares calm and he goes on a rampage.

She first appears in #Fightinthemuseum, where she robs a museum of jewels after tricking Supergirl into helping her.

In #Soulsisters, her soul was taken by Katana, she was later at Bab's House where she and her friends put makeup on as planned by Barbara. After Tatsu freed all the souls, Catwoman told Supergirl & her friends to not speak of it again after getting her soul back. The others would later agreed. Only for Carol to say about her hair that she doesn't hate her new hair look, much to Catwoman's dismay.

In #Beeline, she and the other Super Villain Girls attempt to blow up a bridge after she losses a coin toss to Harley.

In #Ally Cat, Catwoman is enlisted, or blackmailed, by the Super Hero Girls to help them steal the Book of eternity list Catwoman by promising her they won't arrest her if she helps them. Catwoman happily obliges. She plans a heist, but the girls bungle the execution and only barely manage to get to the room where the book is held.  They find Lex where it is revealed that Catwoman was working for Lex and that Lex kidnapped the Superhero Boys. however, when Lex tells Catwoman his plan, she plays along until she confronts him again after freeing the girls, telling him that she ripped a page out of the book so he couldn't predict her actions. Catwoman tells the girls "What can I say, I like the world. It's where I steal stuff." 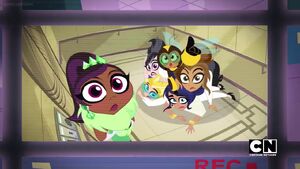