She is voiced by Sanaa Lathan, who also played Vanessa Brooks in Blade.

Selina Kyle, also known as Catwoman, is half Italian and also half Cuban. Catwoman left Ivy to steal a blood diamond and left her to pay for all of her hotel bills, involving many spa treatments throughout a previous mission with Poison Ivy in the Amazon Rain forest to defeat loggers.

Selina met Harley Quinn and Poison Ivy at Chéz Féline to talk about stealing Firefly's flamethrower from Doctor Trap who created a shop in the Gotham Natural History Museum, and while there ruled the trio Cobb salads, to Poison Ivy's disdain. Catwoman agreed to the theft on the terms that she would steal an Egyptian ruby for herself.

Throughout the night of the theft, Selina knowingly attended late as a "power move". After making it, Catwoman told Harley Quinn and Ivy to follow her and that she would handle the traps. Selina used her claws to cut into the museum's atrium. Selina and Ivy ended up being on their own, and throughout the theft, Selina had to rescue Ivy from many traps, in the meanwhile talking about Ivy's relationship with Kite Man and expressing her contempt for it. Selina and Ivy met up with Kite Man and Harley Quinn. Kite Man and Harley also arrived at the same time right after they made to the flamethrower's display. Selina kept her end of the agreement and cut a hole in the display so that Harley could take the flamethrower, but stole the diamond Kite Man really wanted to use to pop the question to Ivy.

Selina is an assured and self-confident woman, who frequently uses her charm in order to win people over. Based on how Poison Ivy has described her, she is manipulative and controlling, as she had bailed on Ivy once before and made her pay for her bills, as well as commands for the table when meeting with Ivy and Harley. Also something of an instigator and gloryhound, Selina often steals things as a jest simply to prove she can, like how she takes Ivy's jacket and puts it on before Ivy realizes it. Throughout their meeting, Selina interrupted Harley and suggested they steal an Egyptian ruby that she wanted, demonstrating a more egotistical and vain side to her.

Selina has olive skin, a black pixie cut, and greenish eyes. She wears a black costume, a belt grey gloves, googles that are cat-eyed and silver in color and a black aviator helmet that has cat ears. 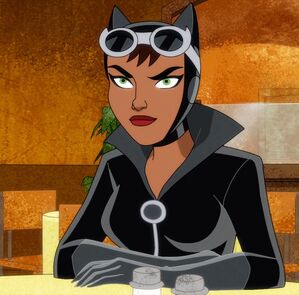 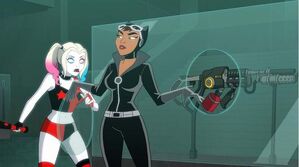 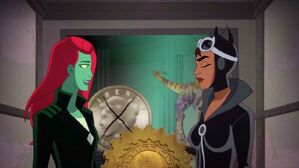 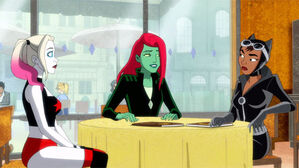 Retrieved from "https://villains.fandom.com/wiki/Catwoman_(Harley_Quinn_TV_Series)?oldid=4114657"
Community content is available under CC-BY-SA unless otherwise noted.