Help Gorilla Grodd to conquer the world (both Falsely).
Help Batman and the Insurgency stop the Regime (true objective, Succeeded).
Be with Batman (ongoing).

Selina Kyle, also known as Catwoman, is a major character of the Injustice series.

She is a minor antagonist of the Injustice: Gods Among Us video game and comic series, and a supporting protagonist of Injustice 2. She is also set to appear in the animated film adaptation simply titled Injustice. She is a former Gotham City thief who redeems herself to become a current ally to Batman.

She is voiced by Grey DeLisle, who voiced Catwoman in the Arkhamverse, Mandy in The Grim Adventures of Billy & Mandy, Vicky in The Fairly OddParents, Asajj Ventress in Star Wars: Clone Wars, and Azula in Avatar: The Last Airbender.

Injustice : Gods Among Us

The Prime Universe Catwoman is first seen fighting Nightwing during the Legion of Doom invasion of the Watchtower. She then fights Raven moments before Batman arrives. Eventually, Catwoman is captured along with Solomon Grundy and Bane after Luthor is defeated. When she notices the red alert and wonders about it, Cyborg tells her it's none of her business until Nightwing pushes her into Raven's portal.

On the Insurection universe, Catwoman teleports to the Hall of Justice where she meets Cyborg at the access panel and gives her a brief salute. She quickly notices that something is wrong with her Regime comrade so she tests him by referring to a so-called date between them. Cyborg lends itself to the game but it blows up her cover as an infiltrator from the other universe because Catwoman never had a feeling for her counterpart. The two opponents then engage in combat and Catwoman finishes knocking out.

Catwoman later assists the Regime during the attack on Stryker Island, in partnership with Damian Wayne. She briefly confronts Batman before explaining to him that she only joined Superman to save him and buy time, which only pissed off Batman due to the number of people who died in his place. Catwoman makes a final attempt to convince Batman to run away with her but he rejects her, leading to a fight between the two former lovers that ends in Catwoman's defeat and Batman telling her that she's chosen the wrong side.

Catwoman is last seen invading the Heroes' Lair along with the other members of the Regime. As she rises to the surface, she is immobilized by Green Arrow. When Superman is defeated by Prime Superman, the rest of the Regime is dismantled and its members are arrested.

Five years after the fall of the Regime, Catwoman was repairing in Gorilla City and is now a member of the Society, a team of Super-Villains formed by Gorilla Grodd with the goal of reclaiming the power left by Superman after his overthrow. So what questions Grodd about a mysterious partner, they are ambushed by Green Arrow and Black Canary then knocked down by Canary's sonic cry. Catwoman then confronts the two heroes and is the first to be defeated, followed by Bane.

Later, Catwoman accompanies the gorilla minions taking along a recently captured Harley Quinn following the appearance of Brainiac, Grodd's famous partner. Against all odds, Selina frees Harley from her bonds and the two women beat the gorillas. Harley suspected that she was Batman's undercover spy, to which Catwoman notes that it was not a great success as she had not earned Grodd's trust enough to find out about his plans for Brainiac.

As the situation worsens further, the heroes are forced to ally themselves with the former members of the Regime. Catwoman is sent with Harley and Cyborg to Arkham to reactivate Brother Eye from the tunnels below but they stumble upon Poison Ivy. The plant meta-human then taunts Catwoman for not having suffered life in the asylum thanks to Batman just so Selina does not reply that she never asked for preferential treatment. After defeating Ivy, they successively face off against Bane, Deadshot and Grid to reach Brother Eye.

Catwoman is last seen aboard the Batplane as Brainiac attempts to shrink cities across the world. When Superman is apparently killed by Brainiac, the fighters receive Coluan's message demanding that Supergirl be delivered to him. Catwoman then mentions that Brainiac controls his ship by thought as Cyborg says. She is not seen again thereafter.

Catwoman is both a devious and deductive person, coming to deduce that Cyborg was an impostor and exposed it by making her believe that her counterpart had feelings for him when it was wrong. Her sneaky side is seen again in Injustice 2, pretending to be on Grodd's side when a reality she wasn't.

She only followed Superman out of fear but also hoping he would spare Batman, showing that she really cares about him. After Superman was defeated, Batman would eventually put his trust in her again.

Selina is an skilled martial artist who can take on several opponents with ease. During her role as Catwoman, she is very proficient in thievery and is quite agile. She is also an expert in whip and claw combat.

Selina's true abilities also come in the art of theft, where she relies on stealth and silence to steal from her targets blindly. When forced to fight, Catwoman relies on quick blows, aided by claws that cling to her gloves and boots, dealing numerous powerful blows that, while not very damaging on their own, add up to effect. cumulative. 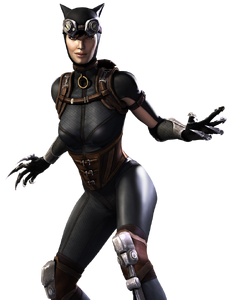 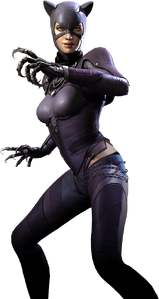 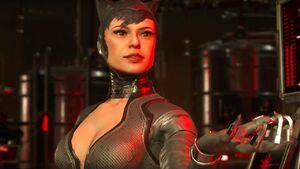 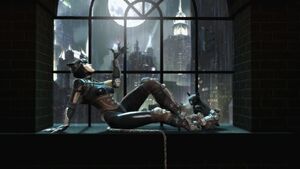 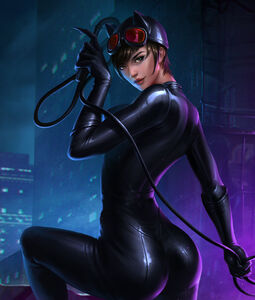 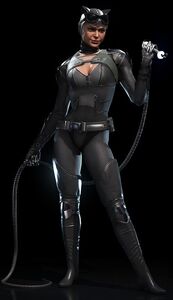