Survive by stealing from the rich and corrupt (initially).

Catwoman (real name: Selina Kyle) is the anti-heroic deuteragonist of The Dark Knight Rises. She is a criminal and an associate of the villain Bane through their mutual employer John Daggett, though she only assisted Bane out of fear of him killing her.

She was portrayed by Anne Hathaway.

Selina Kyle first appears disguised as a maid at Wayne Manor. While no one is looking she attempts to steal from Bruce Wayne and succeeds in making off with a pearl necklace that had once belonged to Bruce's mother. Bruce would later manage to confront Selina for the theft and reclaim his mother's necklace, but this leads an angry Selina to steal Bruce's car as revenge. It is later learned though that Selina has grown tired of her life as a criminal and desires to start fresh, due to so many past arrests and convictions have become bitter and cynical, feeling that the world would never give her a second chance, especially with the ease at which knowledge of her past can be shared. Knowing that Wayne possesses a means by which she can give herself a clean slate, Selina attempts to steal it, also crossing paths with his alter-ego Batman for the first time.

When Bane makes his presence known in Gotham, Selina fears for her life and in desperation sells Batman out to Bane, though is shown to be remorseful over her actions and visibly upset by seeing Bane beat Batman mercilessly. As Gotham City subsequently descends into chaos and anarchy with Batman gone, Selina attempts to leave Gotham but is arrested again by detective John Blake. She is not locked up for long though before Bane causes a mass prison break, allowing Selina to flee and reacquire her equipment. Though she initially revels in the ability to take what she feels has been owed to her for so long, she becomes remorseful and guilt-ridden upon seeing the devastation caused by Bane's actions, at one point taking up residence in a building that she notes once belonged to an innocent family.

When Batman returns, she reluctantly aids him but also plans to leave Gotham for good as soon as possible. Batman appeals to her inner goodness and Selina, rather than flee Gotham when she has the chance, chooses to instead help Batman, arriving just in time to save him from Bane, who she kills with the Bat-Pod's cannons. Right before Batman then seemingly sacrifices himself, Catwoman kisses him, also noting that they're "both suckers". She is later seen by Alfred living a new life with Bruce Wayne, the two finally able to start fresh and leave their painful pasts in Gotham behind. 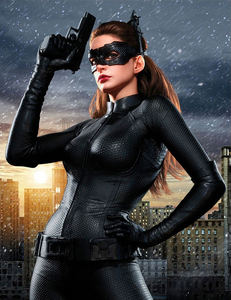 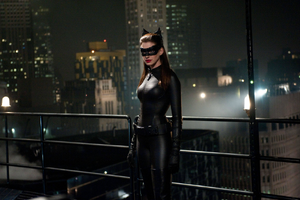 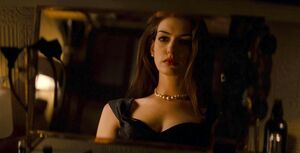 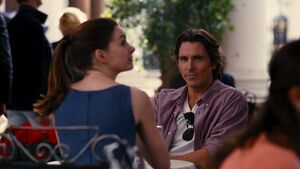 Selina having a fresh start with Bruce. 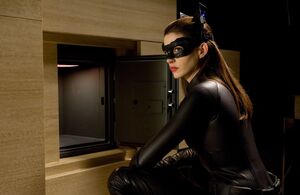 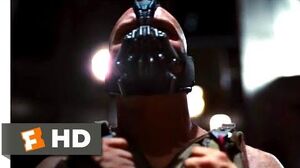 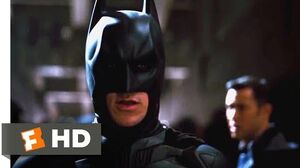 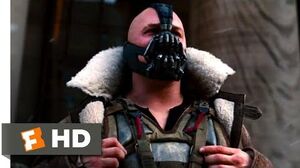 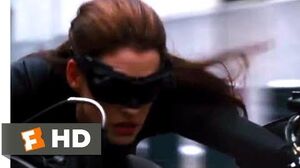 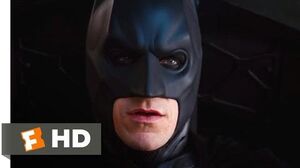 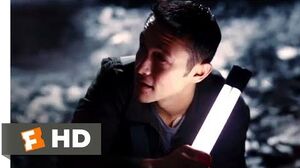 Retrieved from "https://villains.fandom.com/wiki/Catwoman_(Nolanverse)?oldid=3986234"
Community content is available under CC-BY-SA unless otherwise noted.