Catwoman (real name: Selina Kyle) is a semi-antagonist in Batman: The Telltale Series. Like virtually every other depiction of the character, she is a sensual costumed cat burglar who crosses paths with Batman but also develops feelings for him. While not always a villain, she nevertheless sometimes serves an antagonistic role.

She is voiced by Laura Bailey, who also played the titular character in Catherine, and Nadine Ross in Uncharted 4: A Thief's End.

Catwoman is first introduced trying to steal from the corrupt mayor of Gotham City, Hamilton Hill. Batman intercepts her and the two engage in hand-to-hand combat that ends with Catwoman nearly plummeting before Batman catches her in time. However, she is able to escape after scratching Batman's face with her claws.

Later, Bruce Wayne meets Catwoman in her civilian identity of Selina Kyle (Harvey Dent's "girlfriend"), and the two recognize each-other. After spending some time getting to know each-other and trying to figure out what each is after, Bruce convinces Selina (either through persuasion or coercion), to let him go to where she was supposed to meet clients about a job.

Later, Bruce goes looking for her after discovering that Oswald Cobblepot is after her. The two end up working together to fend off his men at the bar they were both at, and Bruce has the option to try and kiss her, though Selina will not let him if he chooses to.

Later, Selina as Catwoman shows up to help Batman stop the Children of Arkham, considering it her way of "paying her debt" for Bruce earlier helping her. However, during the battle at the mayoral debate, Catwoman is injured, and Batman must choose to help either her or Harvey Dent. If he chooses the former, Dent's face is horribly scarred, and Batman takes the injured Catwoman to Wayne Manor so she can recuperate.

The two then go to visit Harvey Dent in the hospital (which Bruce will do solo if he did not save Selina). Selina will ask Bruce why he chose to save her, and he can choose to answer how he will (notably, if he tells Selina it's because he cares about her, she will note that perhaps he shouldn't).

Later, Catwoman will show up delivering containers to the Children of Arkham, apparently willing to temporarily work with them long enough to betray them and then skip Gotham. However, Lady Arkham becomes aware of Batman's presence and takes Catwoman as a hostage to get him to stand down, though Catwoman will free herself and a fight breaks out.

After Batman is badly hurt in his fight with Lady Arkham, Catwoman takes him back to her place and tends to his injuries, also lowering her guard around him and revealing how privately unhappy and self-loathing she is as a person. It is here that Bruce can choose to get romantic with Selina, though if he did not save her in the previous episode, she will only partially return his affections rather than fully. Either way, Bruce has the option to have sex with her.

The following morning, Bruce can explore Selina's apartment to learn more about her. However, Harvey Dent soon arrives, and whether Bruce slept with Selina or not, will succumb to his Two-Face persona and fly into a violent rage, believing that Selina has cheated on him with Bruce. Afterwards, Bruce has the option to let Selina stay at Wayne Manor until he deals with Harvey Dent, but she soon decides to leave Gotham altogether due to Harvey's growing instability and the increasingly authoritarian transformation of Gotham City.

However, Bruce later discovers that his hi-tech Skeleton Key is now gone, and realizes that Selina must have stolen it from him. Confronting her outside of Gotham City, he demands that she return it, which she does. Bruce then has the option to part with Selina on good terms or bad (which is dependent on his regarding her as being more than just a thief and also not telling her that he loves her, as she will not believe him and leave in disgust). At the end of the first season, Bruce will get a post-card with a picture of a black kitten on it if he and Selina left on friendly terms.

Later, in Batman: The Enemy Within, Selina's goggles (and her cat picture, if she gave it to Bruce at the end of Season 1), are now in the Batcave as mementos. Selina returns at the end of the second episode, apparently now in league with the Pact. However, it soon comes to light that she's really only there to figure out what happened to Riddler, and to get justice for his victims, as she had done work for Riddler before and now feels a personal responsibility to make right his wrongs. She and Bruce work together with John Doe at first, but Selina will ultimately go her own way after a fight with Bruce Wayne in which he can try to kiss her (and John will notice whatever choice Bruce makes).

After Batman is informed by a bitter James Gordon that Catwoman is back in town and that he intends to arrest her if Batman doesn't bring in Bruce Wayne for him, Batman is faced with an ultimatum of whether or not to warn her. If he does, he later fights her on the very same rooftop and helipad where they first met (and fought). Batman ultimately gets Riddler's laptop from her (which she had earlier taken from Riddler's lair). Batman can choose to re-affirm his feelings for Catwoman (or express them for the first time), at which point they share a kiss and then go back to Wayne Manor together.

On the other hand, if Bruce does not warn Catwoman, he later finds a badly injured Selina at Wayne Manor. He can choose to be honest with her about whether or not he knew Gordon was after her. If he tells the truth, Selina will be mad at him, but Bruce can still get her forgiveness if he cooperates with her...or cause her to violently attack him and flee Wayne Manor, depending on his choices.

Whether he warned Catwoman of the GCPD's hunting her or not, Bruce can take Selina into the Batcave depending on his choices, where they can have additional romantic moments, though Selina will be initially miffed that her goggles and/or kitten picture are displayed next to trophies taken from Batman's enemies. Later, when Bruce ends up in hot water with the Pact, he can choose to sell Catwoman out or take the fall. If the former, she is put in one of Riddler's murder-boxes. If the latter, Bruce is put in Freeze's cryo-chamber.

The consequence of these choices are that Catwoman will either show up to help Batman fight the Pact members (after being forced to help them break into SANCTUS' hideout and being horrified by their monstrous bloodlust), or being absent and then Bruce later returning to the Pact hideout to find that Catwoman has escaped the Riddler's murder-box...

In the Season 2 finale, Selina's story differs sharply depending on both whether Bruce betrayed her or not, and also whether John Doe became a villain or a vigilante. This leads to two main scenarios:

Either way, Batman can later get Amanda Waller to take Catwoman's collar off, allowing her to go free. He can also potentially get her criminal record expunged by Waller out of gratitude (if John became a villain and Bruce helped stop him). 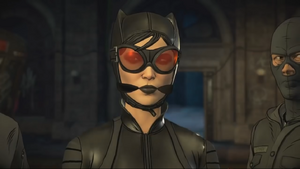 Catwoman bound, gagged, and is held hostage by the Pact.
Add a photo to this gallery

Retrieved from "https://villains.fandom.com/wiki/Catwoman_(Telltale)?oldid=3910042"
Community content is available under CC-BY-SA unless otherwise noted.