Hunting and killing for food.

Catzilla is an one-shot antagonist in The Garfield Show, appearing as the main antagonist in the episode Orange and Black. He is a rare and near descendant of the prehistoric Smilodon-like tigers who escaped from the zoo and hunt down anyone as his food.

Nothing much known about Catzilla's past. Possibly, he was frozen in ice after his species were extinct 10,000 years ago. The saber-toothed cat got thawed out of the ice and got taken to the zoo by the authorities after he was discovered in an unknown snowy area. They later named him Catzilla because of his long teeth.

Catzilla is first seen in the cage at the zoo while broadcasting on the TV news, getting up Garfield's idea to get more candy in Halloween. Suddenly, Catzilla has just escaped from his cage and scares everyone on the TV news when Jon and Odie are watching.

Later at night, Garfield gets captured by the authorities thinking he's Catzilla in his costume, and no one except Garfield sees the real Catzilla sneaking into Jon's house. At the zoo, Garfield reveals himself to the zookeeper he's not Catzilla and gets freed while rushing back to the house.

Meanwhile, Jon goes into his kitchen where he finds Catzilla, and is chased around with Odie. Garfield arrives home shortly and is chased with the other two. Eventually, Garfield throws taffy at Catzilla, and it keeps the beast's jaws shut. The police soon capture it, and Catzilla is returned to the zoo. The next day, Jon and Garfield visit at the zoo, and the zookeeper informs them of Catzilla's diet, which includes various meats, knowing he's a carnivore. Delighted, Garfield joins the feeding time with Catzilla, much to the beast's confusion. 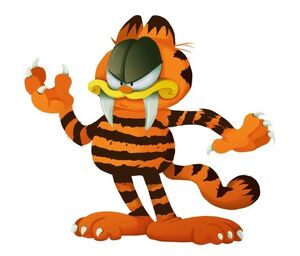