The Hazelhurst Caucasian Club is a one-time villainous organization from the Comedy Central animated raunch-com, Brickleberry, only appearing in the episode "In Da Club". They are a predominantly white country club of white people, who initiate people into their club, so that they can eat them because they are also a barbaric cannibal tribe.

In "In Da Club", it was announced that there was an opening at The Hazelhurst Caucasian Club and Woody Johnson was looking to get in. However, he needed Denzel to work as his chauffer to make him look fancy. When Woody got to the Caucasian Club, he was interviewed by Asher and his two other white friends but they didn't seem to like Woody. However, when Denzel came in, they all immediately loved him and quickly asked him into the club. Denzel accepted and entered the club, bumping Woody out of the position, which pissed him off. Asher showed Denzel around the country club and introduced him to the pool, the tennis court, the sauna, the ballpit, the bumfighting ring, and of course, the golf course. The whites were very pleased to have Denzel on their team until Steve managed to break in and get blackout drunk. He acted like a complete idiot and then the Caucasian Club kicked him out. Steve was so mad that Denzel left him to go hang out with the Caucasians, that he decided to betray him back by becoming friends with a bunch of lesbians. At the country club, Denzel demonstrated excellent golfing skills and the Caucasians really loved him for it. Woody tried to get in dressed as a Mexican/Japanese/Jewish/Puerto Rican freak, hoping to get in via affirmative action but this just got him kicked out even harded and raped by a donkey. Steve and Denzel got into a fight over which club was better and they got into a golf contest. The crackers fought against the lesbians and during that time, Steve went to the bushes to take a shit. While he did, he overheard the Caucasians talk about how they were going to kidnap Denzel and eat him by killing him, roasting him over a fire, and slicing up his body and putting his skin into their famous club sandwiches. Steve tried to warn Denzel about this but Denzel didn't buy it, assuming he was just jealous of his new friends. Because he ignored this warning, the Caucasians kidnapped Denzel and took him away to the campground, where they tried roasting him over the fire to eat him. Fortunately, Steve came in to save the day and set Denzel free but there was no way he'd be able to get past the white people. At this time, Malloy took a massive shit that was so big that a blast of poop covered all of Hazelhurst in shit, including The Caucasian Club. The Caucasians were unable to tell the difference between the black people and the white people because they were all covered in shit. Steve and Denzel were able to escape, while the Caucasians mistook Asher for Denzel and beat him with golf clubs, killing him. After realizing their mistake, they decided to give up on Denzel cook Asher into their sandwich. 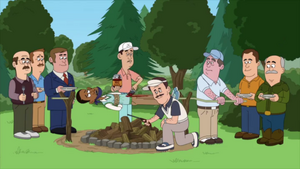