Leader of the Sabaoth Squadron

Aid the Separatist cause.
Use the trihexalon against Republic targets.
Kill Adi Gallia and her allies (all failed).

Captain Cavik Toth is the main antagonist of the 2002 videogame Star Wars: Jedi Starfighter. A mercenary warrior who is the captain of the Sabaoth Squadron, Toth is hired by the Confederacy of Independent Systems, led by Count Dooku, to oversee development of the biological weapon trihexalon, which Toth plans to transport to the Separatists to deploy against various civilian and military targets affiliated with the Galactic Republic in their impending war.

He was voiced by Adrian Zmed.

Toth stands out from other Separtist leaders not only through his sheer ambitiousness and persistence, but also his depravity. Desiring nothing more than approval from Count Dooku and the Separatists so that he can receive his money, Toth enthusiastically committed acts of terror on innocent civilians so that he can spread psychological terror across the galaxy to further their cause.

His sadism is also reflected towards the heroes as well, at one point boasting in the battle at Geonosis that he would capture them alive solely to enjoy torturing them to a painful death. He did whatever he could to avoid being held accountable for his crimes, at one point taunting Gallia for suggesting he surrender and answer for his crimes, claiming that the only crime he committed was not killing Gallia when he had the chance, showing that he had no remorse for any of his atrocities.

His obsession with money and Dooku's approval causes him to care little to nothing about his subordinates, no matter how loyal they are to him, as evident when he left Bella to fend for herself against Nym on Lok when the pirate captain successfully regained control of the planet from the Trade Federation. More tellingly, he left his crew to die aboard his exploding flagship out of a self-serving desire to destroy Gallia himself. Intolerant of failure, Toth also shows a willingness to punish his subordinates with death, as Harro Ruuk and his associates learned the hard way.

All told, Toth remains one of the most vile villains to appear in the Star Wars video game chronology.

Toth is a Human male who frequently wears a mercenary suit wherever he goes. Among his more notable facial features include a large scar that surrounds his left eye and the leftmost part of his lip, though how he got the scar is unclear.

Toth is first seen having a discussion with Count Dooku via hologram. Dooku expresses concern about a resistance movement in the Trade Federation-controlled Karthakk system, and requests information on whether the movement is affecting research on the trihexalon, a chemical weapon that the Republic banned from military use years ago due to its ability to vaporize anyone within a considerable range. Toth assures Dooku that the Federation is hard at work crushing the rebellion, and that the research remains on schedule. Dooku informs Toth that the trihexalon must be transported to Geonosis upon completion without any delay, as the Separatists intend to use it against Republic targets for the imminent Clone Wars.

Later, Toth, with his Twi'lek lieutenant Bella rendezvous with several Trade Federation supervisors, led by Harro Ruuk, to discuss progress on the trihexalon. Ruuk reveals that they had managed to produce a sample of the gas, but have not been able to test it successfully nor have produced the stockpile of Hex desired by Toth. Disappointed over falling behind schedule, Toth declares that he is taking full control over the project, killing Ruuk and his associates by throwing and unleashing the sample of Hex at them. Seeking to get a proper test for the gas, Toth orders Bella to store the stockpile into the transports in preparation for use against the planet Maramere, where the Karthakk system resistance is based.

Using Hex missiles, the Sabaoth Squadron launches a full-scale assault on the planet's capital Point Modie. The bombardment results in the death of thousands of civilians, and further casualties were only averted by the arrival of Jedi Master Adi Gallia, Toydarian pirate Reti and Mere resistance leader Sol Sixxa. Seeing the extent of Toth's plans, Gallia, Reti, Sixxa and the Feeorin pirate captain Nym banded together to sabatoge Toth's operations, destroying all of the Hex factories and compounds throughout the Karthakk system.

Arriving at Geonosis with the Hex stockpile, Toth arranges the Sabaoth Squadron to surround the planet with the intent to bombard it with Hex weapons to kill as many Republic and Jedi troops on the surface as possible. Gallia, with assistance from her padawan Siri Tachi as well as several Jedi pilots, destroys the Hex fleet and engages in a vicious space battle. The tide starts to turn in the Jedi's favor when Nym and several Mere resistance fighters join in. Toth himself later joins the fight in his flagship, and he manages to push Nym out of the fight by crippling his starship. When the heroes successfully destroy the ship, Toth escapes in his own starfighter as the ship explodes. Challenging Gallia to a dogfight, Toth proves no match for the Jedi Master, and is quickly destroyed by the Tholothian's Delta-7 interceptor. 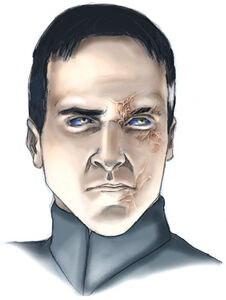