The Ocean Dragon, Moon in the Water, Cea, Deus, Shining Gem of the Depths

Massive strength, Ability to shoot out bursts of water

Alleviating its pain by brushing its horn on Moga Village's underside

Rid itself of its cumbersome horn, Kill the Hunter

The Ceadeus is a massive, whale-like Elder Dragon and the final Monster fought in Monster Hunter 3's main campaign. Only learned to have existed recently, the Ceadeus is the true cause of Moga Village's earthquakes, rubbing its frontal horn on the island's underside to sooth the pain of said horn overgrowing and enveloping its left eye. It serves as the main antagonist of Monster Hunter 3, and is the final boss of the offline Low-Rank campaign.

A massive Elder Dragon with an appearance resembling that of a whale, the Ceadeus is one of the largest Monsters in the game, only rivaled by the Jhen Mohran and the Dire Miralis. It has two massive frontal horns, one which overgrows its left eye and causes it pain. It has a silvery beard, which can be shaved in the event of the final battle, yellow, fish-like eyes, and a giant tail which it uses to propel itself while swimming. It also has blue, luminous organs seen through its transparent underbelly, which glow red when enraged. The Ceadeus is normally docile and careless of humans, although if sufficiently enraged, will do everything in its power to destroy the threat. Its radiant appearance has earned it the title of "shining gem of the depths," and is associated with the moon because of this. It move surprisingly fast for one of its size, and is hugely powerful. It can expel jets of pressured water with enough force to potentially kill heavily armored humans, and can level solid rock walls with little effort at all.

Ceadeus is first encountered deep below Moga Island, in an area known as the Underwater Ruin. Although the Lagiacrus is initially fought to be the cause of Moga Village's earthquakes, after being seen by Cha-Cha, the true perpetrator is revealed. The Ceadeus was attempting to alleviate the irritation caused by a horn overgrowing its eye by slamming the horn on the underside of Moga Village, inadvertantly causing devastating earthquakes. The Ceadeus is feared by the Guild, and threatens to suspend the Hunter if they attempt to confront it, instead suggesting an army of G-Rank Hunters to deal with it. However, with Moga in peril and with all the support they need, the Hunter actively defies orders and goes down to hunt the Ceadeus.

Using the Ancient Mask, the Hunter is allowed to breath underwater and fight the beast. Althought the Ceadeus is initially passive and only attacks the Hunter if it gets too close, the Ceadeus is enraged by the Hunter's growing efforts and tries to kill them directly after a time has passed. The Ceadeus can be gradually whittled down, its horn can be broken, and it does not have to be slain within one quest. If the time limit expires, if hunted again, the Ceadeus will still have the amount of health it had last time. After the battle concludes, the Ceadeus is repelled and the Hunter, instead of being fired, is rewarded for their efforts and is hailed a hero. The Ceadeus is then able to be optionally hunted and killed for normal supplies. Being a massive, underwater Elder Dragon, capture is impossible. 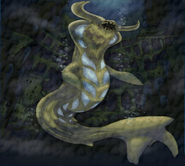 Icon of a normal Ceadeus

Render of an enraged Ceadeus

Ingame Ceadeus
Add a photo to this gallery

Retrieved from "https://villains.fandom.com/wiki/Ceadeus?oldid=3888468"
Community content is available under CC-BY-SA unless otherwise noted.