Cee-dric (by Sofia)
Cedric the Great (by himself)

Making attempts and plans to take over the kingdom of Enchancia.

Take Sofia's amulet and use its power to take over all of Enchancia (all formerly).

Cedric the Sorcerer, also known as Cedric, is the main antagonist of the Disney Junior animated series Sofia the First. He is a sorcerer who plans on trying to get Princess Sofia's magic Amulet on her necklace in order to get the power to rule all of Enchantia. However, he ends up failing due to being somewhat incompetent and occasionally feeling remorse. In "Cedric Be Good" and "Day of the Sorcerer", Cedric has now officially given up on his goal of trying to take over the Kingdom with Sofia's Amulet and reformed himself.

Cedric is a gawky, bumbling, and incompetent sorcerer whose spells often do not work very well. Despite this, he takes great pride in his abilities and often brags about them. He wants to steal Sofia's Amulet of Avalor, hoping to use it to take over the kingdom and reign as a dictatorial and oppressive king. In order to achieve this, he often tries to trick Sofia into giving it to him, though his attempts usually fail, due to his insufficient and incapable nature. Sofia used to mispronounce his name as "Cee-dric" rather than "Said-Rick", which annoyed him to no end. However, this stopped occurring once the show's second season began.

Though his motives may speak otherwise, Cedric is not truly evil. He desires power merely to prove to those that mock him that he is capable of greatness and it has been revealed that Cedric is very much aware and hurt by how poorly others regard him. One of the main reasons, most of his spells fail is actually shown to be due to how easily he gets nervous, especially in the presence of King Roland and the main reason his plans fail is because he never thinks things through.

Also, despite having the looks and desires of his mother, he has a code of morality - he will not directly harm anyone, though he does manipulate, and he does not let anyone unnecessarily suffer and will always pay back debts, or at least try to. Cedric also hates cheating, although he just fine with lying. He is also easily (and heavily) ashamed when he does things wrong.

While Cedric is very devious, conniving, manipulative, and fraudulent, he is not without a heart. In fact, it was during the eponymous episode "Cedric's Apprentice", that Cedric was visibly touched by Sofia's kindness towards him and was grateful when she purposely spilled a potion on herself during a performance in order to help him display his magical abilities before King Roland and the visiting King Magnus. At this point, he declined to use an invisibility potion that he had brewed to steal the amulet, instead, using it to show off his magic more. Later, he stated to Wormwood that they could always take over the kingdom tomorrow. In episodes following this, he is indeed shown to still be plotting ways to steal Sofia's amulet for the purpose of taking over the kingdom.

When he finally got the Amulet, he intended to use a rare potion to pluck specific powers from the Amulet to help him take over the kingdom but made the mistake of putting it on before using the potion, thus enabling him to be cursed. Throughout the episode, Cedric's good side clashed with his bad side. As much as he liked helping people and getting powers, his desire to take over the kingdom proved stronger, getting him constantly cursed. Later on in the episode, he returned the amulet to its rightful owner. It is unknown if he did this to prevent getting any more curses or if he did this because it was the right thing to do. Whatever the reason, he returned it without Sofia realizing that her amulet had been stolen. He renewed his interest in the amulet after Sofia told him about the change to her amulet and discovering its new powers. Though he showed visible distress when Grimtrix tried to steal it from Sofia, indicating he values Sofia's safety more than the amulet.

Cedric is tall and slender man, with a long pointed nose, brown eyes, and pale skin. He has black hair with gray front bangs, and wears a long purple robe and a large yellow bow tie. He is always seen wearing a pair of fingerless gloves.

Though extremely magical, his spells often do not go very well. The strength and accuracy of his spells depend on his self-confidence, which could be the reason he usually messes up his spells. It has been noted when people believe in him or treat him with respect his spells work perfectly. Surprisingly, Cedric is a very good teacher as he was able to teach the Royal Prep students, without being able to wave his own wand due to a sticky spell. Once Cedric earned his Family Wand, his magic greatly improved. This gave him confidence, which led to him earning more respect from Roland and ultimately leaving his tower.

Sofia the First: Once Upon a Princess

Cedric first appears in the ceremony when Sofia becomes princess casting a spell that causes rain by accident, and then clears it. He takes interest in Sofia's amulet which holds the power to rule the kingdom. He secretly plots to steal the amulet from her, and lures her into his lair. There, he asks for her to take off the amulet, but she refuses, as she promised to keep it, and Cedric grudgingly lets her leave.

Later on, after Sofia is humiliated by her step-sister Princess Amber, Sofia visits Cedric again and asks him to give her a spell that will make her a good dancer. Cedric makes up a plan and gives her a spell that will make everyone in the ballroom fall asleep, and then he will blackmail her to give him the amulet. However, when she chants the spell, Cedric happens to be in the ballroom at the time, and he falls asleep as well. Together, Sofia and Amber undo the spell, and Cedric disappears in anger.

Despite being the main antagonist, Cedric sometimes appears in a more heroic light. In the fourth episode, "Cedric's Apprentice", he helps Sofia to learn some magic and saves her, when the princess turned herself into a lizard. This time he's going to steal the Amulet of Avalor, while Sofia cleans his workshop, but she arranged a performance for him because king Magnus arrived. Then, Cedric plans to steal the amulet at the performance and then rule two kingdoms. However, spirits of his father and mother made him think if his friendship with Sofia is enough cost for it. At the performance, he saves Sofia again, when she turned herself into a lizard again. Then, Cedric didn't steal the Amulet, and told his angry crow that they can always steal the Amulet tomorrow.

In the episode, "The Enchanted Feast", Cedric again playing the role of hero. When Sascha the Sorceress arrived as well, as the royal families of other kingdom, his wand was hexed and he didn't execute the mirror spell right. While the dinner, Cedric leaves it, but then Sofia told him that Sascha the Sorceress is really Miss Nettle and she's planning to steal the Amulet of Avalor. Cedric became angry when he heard that and matched Miss Nettle to the duel. Hovewer, because Miss Nettle hexed his magic wand, she easily won the battle. After his crow and rabbit of Sofia brought Cedric another wand from his workshop (because Miss Nettle and her magic flower blocked the whole castle), Cedric and Sofia tricked her and then saved the royal family.

Cedric played a pivotal role in the special, "The Curse of Princess Ivy", where he learns about the threat of Princess Ivy planning to take over Enchancia herself with her magical powers. He assisted Sofia and Amber into finding a way to break the curse that Ivy has caused.

It's revealed in "Cedric's Apprentice" and "Mystic Meadows" that his resentment of his lot in life and his desire for power and glory came from a desire to live up to the standards of his father Goodwyn the Great and that most of his slip-ups happen because being around King Roland makes him nervous and because his father interrupts him whenever he tries to cast a spell in a way that makes him mess it up. Thanks to efforts and encouragement from his first-ever friend Princess Sofia, Cedric is able to earn the pair's respect, his family's Family Wand, and the title Cedric the Sensational.

Most recently, he is revealed to have a niece named Calista. Calista is shown to be the only member of his family besides his mother who adores him and the only one he's not annoyed by. Cedric is shown to care for her to the point where he goes out of her way to keep her safe and teach her important life lessons such as the importance of asking before taking and how it's wrong to steal. He is also shown to idolize Merlin.

Through Cedric didn't encounter Sofia face-to-face being one of her friends, he made several appearances as a true villain. The first notable example of "Evil" Cedric it is his role in the episode "The Amulet and the Anthem", where Sofia became timely spoiled girl and made the Amulet of Avalor to curse her. Cedric becomes faux tragic when learn about it, but then remind the princess about that amulet can bless, but can harm. He then using strong psychologic attacks to Sofia in giving the amulet to him, so he could undo the curse. However, Sofia redeemed her errors and the Amulet undo the curse itself, leaving Cedric angry.

The most notable current evil role of Cedric it's his role in full-lenght movie "The Floating Palace", when he transforms himself into sea monster in order to steal mermaid magic tiara. It was the first time he and Wormwood battled Sofia, however, being unrecognized, as the transformation changed them physically very strong. In the end they were blown up to sky, only to transform back and return to royal ship. Cedric then went to his timely ship's workshop as Wormwood laughed at the sea monster tail which left on Cedric. 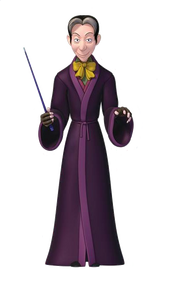 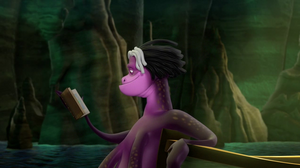 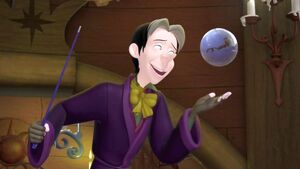 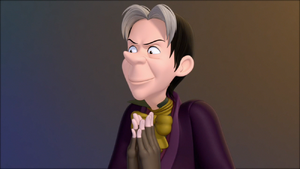 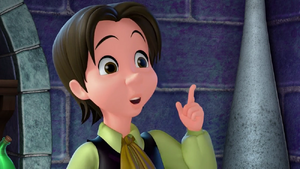 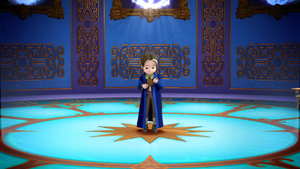 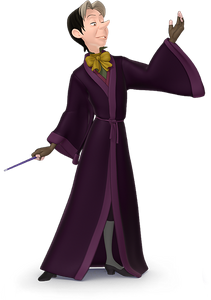 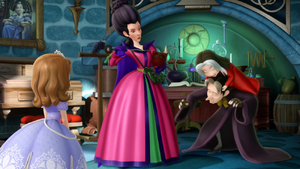 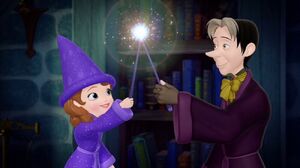 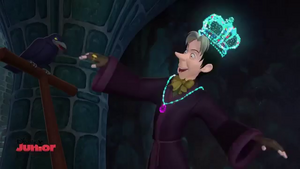 Retrieved from "https://villains.fandom.com/wiki/Cedric_the_Sorcerer?oldid=4284346"
Community content is available under CC-BY-SA unless otherwise noted.