Leader of the Fifth Church.

Celebration 'Big Cheese' Horace, also known as SCP-1982 Entity is a recurring antagonist in the SCP Foundation Mythos. He is the unofficial and mysterious leader of the Fifth Church. He is first encountered in SCP-1982, a tent covering a church that although it appears empty, voices of the attendants who had entered inside after being invited by Horace could be heard. Horace is most often portrayed as the main leader of the religion of Fifthism.

Much like Horace himself, his true origin is shrouded in mystery. In SCP-2517, it is suggested that Horace is one of the earthy incarnations of SCP-3125, the deity responsible for the existence of Fifthism, and was apparently so old that he at some point became acquainted with Lord Blackwood. In modern times Horace apparently fathered a child named Louis Anna who would go on to become one of Fifthism's leaders.

Horace went to an abandoned Southern Baptist church in Blairsville, Georgia, and turned into a church preaching about Fifthism. Local residents with substantial fame and wealth that approached the church would be greeted by Horace who would invite them inside, causing those people to mysteriously disappear. During the late 50s and early 60s, John Carlyle, owner of Carlyle furniture and a gay man who secretly cheated his wife, heard one of Horace's radio broadcasts and went to the church since it promised to fix people's bodies as he felt contempt over his own body. Horace promised Carlyle to fix him and invited him inside the church where he had Carlyle's soul separated from his body, causing Carlyle to become emotionless. The SCP Foundation eventually discovered this anomaly and designated it SCP-1982 while they prevented anyone from reaching it. Using one person who had been invited, Researcher Ortega attempted to access the church in its true form, but the congregation speaking through Horace's smoke pipe denied them entry, forcing the invited person to go alone inside.

When Fifthist Bobby Jefferson disobeyed one of Horace's requests, the latter began using his connection with the other Fifthists to track him down. However, through his connection he found out about the Fifth International Workers' Vanguard, a communist Fifthist group which replaced printed communist periodicals with their own messages, he went straight up to them, since he was surprised that there Fifthist communists. After confronting them the group obeyed him and replaced Redneck Revolt Newsletter #3 with Horace's message to Bobby, threatening him while displaying small frames from the Merry Melodies cartoon One Froggy Evening. However, when the Foundation discovered the message and went to Jefferson, the latter denied any connection with Fifthism.

Eventually, the Fifth Church and SCP-3125 began successfully taking over the entire world along with the rest of reality. As everyone succumbed to Fifthism, Horace held a massive congregation to test the present Fifthists if they were secretly worshipers of SCP-2747. After messing with Fifthist Lawrence O'Neil, Horace accused O'Neil's new companion as being an Anafabulist and had everyone present drag her to the center of the stage where a hole opened to swallow her. Horace and everyone else would later die alongside their universe after SCP-2747 was summoned which led to it devouring them.

As humanity began succumbing to SCP-5712, a memetic entity devouring information from the infosphere, Horace and his congregation went to a Fifthist drug rehab center in Three Portlands to help the patients as they weren't affected by the entity the same way the others were. As the world seemed to be ending, Horace became somewhat depressed as this wasn't the exact apocalypse he had hoped for, with concepts disappearing from human thoughts. When a Foundation double agent entered the building, Horace and his congregation were able to detect him almost immediately and had him restrained. After discovering that the agent sought to use a light of memetic chemotherapy on them, Horace destroyed his mind and identity, leaving the agent's body to become unperceivable. Horace then proceeded to wipe out the minds of his fellow Fifthists for them to go to the Fifth World except for a member named Ciel whose mind was already blank.

While the world was slowly being destroyed, the rehab was taken over by two members of the Horizon Initiative as part of their research in anomalous religions, but Horace didn't mind since he had planned to ascend to the Fifth World and leave the world behind. After the day was over and the rehab closed, Horace and Ciel walked away through the rain to the motel they were staying, thinking to himself a Fifthist hymn about not letting hopeless causes die and continue the legacy of the fallen until joining them. Then both he and Ciel felt that another Fifthist reverend had just died, causing Horace to refuse to go out like this. Figuring from the double agent's arrival, that the Foundation believed that he could destroy the ones responsible for the memetic chemotherapy, Horace went to a nearby electronics store and bought a burner phone which he later modified in order to keep anyone from intercepting the call. He then proceeded to call Dr. Naman Gupta, the creator of SCP-5552 which was a method of time travel, to ask him for a way to travel to a distant century, since Gupta owned Horace a favor.

As one of the leaders of Fifthism, Celebration 'Big Cheese' Horace held great supernatural and psychic powers. He could easily access the noosphere, the human collective consciousness, and feel the connection between all Fifthists. When he deemed those who had come to his church as worthy of joining, Horace could teleport them inside the building that could only be accessed by him and fellow Fifthists as when someone entered the church it would be empty.

Members of his congregation would talk through Horace's smoking pipe, meaning that they had become connected to him. Horace has proven to also be capable of detaching souls from their bodies, leaving the soulless bodies to roam around without any emotion. Thanks to his access to the noosphere, Horace could easily manipulate the minds of others, destroying or wipe them out entirely and could apparently also cast illusions and hallucination. Horace appears to possess immortality or at least advanced longevity as he appears to have known Lord Blackwood when the latter was in his human form.

Celebration 'Big Cheese' Horace is shown behaving in a very enigmatic and weird manner. Often making funny faces and not taking things very seriously. Apart from that, he presented himself as similar to a Southern Baptist preacher, preaching to the religion of Fifthism, but through bizarre manners. However, based on his actions it can be deduced that despite his goofy behavior, he is determined to spread Fifthism by kidnapping people and brainwashing them into adhering to the religion. When Bobby Jefferson allegedly sniffed Horace's message and didn't come to him as he requested, Horace became so mad that he attempted to track him down which eventually led to him using the Fifth International Worker's Vanguard to deliver a message to him. He was friendly with those who were accepting or respectful of Fifthism, but was extremely hostile to those who threatened the religion. 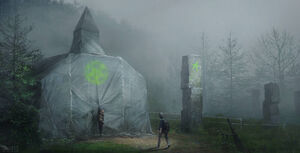 Horace poking his head out to greet his new visitor. 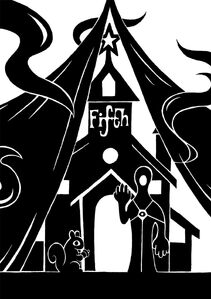 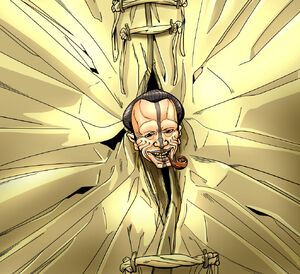 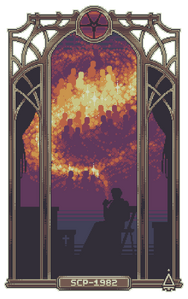 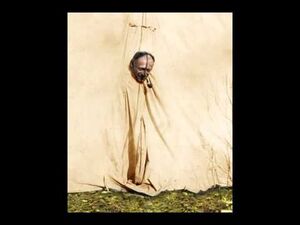