Altering courses of planets' histories through their actions.

Interfering and tampering with planets' lifeforms.

Erase planets and races they deem failures/unfit/unworthy (to what end remains unknown).

The Celestials are immensely powerful beings featured in the Marvel Comics universe, considered by some to be villains (confirmed as such in a few official works, where they have fought heroes and villains alike, they are greatly feared even by a being of Galactus' might - although in others Galactus has engaged and defeated them). This race currently consists of about 22 known Celestials, but the number varies considerably from story to story (in the beginning of time, for example, they were said to be as many of them as stars - which would put them at a rate of trillions upon trillions (they were largely wiped out due to the First Firmament.)

Worshipped as "space gods" by many races, they may be benevolent by their own lights (unlikely as they often act robotic and rather malevolent, save perhaps to their creations, the Eternals), but they have absolutely no regard for the interests of anyone but themselves. They consider virtually all other beings 'germs' (much like the Monitors of DC multiverse), and destroy entire worlds and species if they think its necessary. Even the Watchers are not safe from their judgment.

Celestials are gigantic armor-clad humanoids. They are approximately 2,000 feet tall, some of them are even larger (such as Exitar, their executioner; usually 20,000 feet tall, he can seemingly increase his size at will, attaining planetary-level stature) : the otherworldly 'mad Celestials' can also merge with each other to create even larger and formidable forms.

The powers of the Celestials are for all intents and purposes limitless. One thousand years ago, Odin - the head of one of Earth's most powerful pantheons - had decided to stand up to them. Working together with the heads of the other god families such as Zeus and Vishnu, he created a mighty weapon, the famous Asgardian Destroyer; when the Celestials reappeared on Earth, Odin animated the automaton with the life-force of all Asgardians except for Thor and confronted the space gods wielding the deadliest weapon in the world, the Odinsword. But the Celestials handily dealt with this ultimate attack as if it were a mere distraction.

The origins of the Celestials have always been vague, but the First Firmament revealed they were already present in Its structure, and disturbed Its order. For this, they went to war with Its preferred creations, the Aspirants, and in the conflict the First Firmament was ripped apart. The Celestials then moved to the new multiverse which was formed out of its substance.

Some sources believe the Celestials actually created the first life forms in the nascent multiverse, as well as, eventually, beings which would introduce death. These destroyers were themselves deemed a failure by the Celestials and sealed away in a pocket reality.

The Celestials would come under attack by the Aspirants at least once during the previous - seventh - iteration of the multiverse, and many of them were slain by the Aspirants' hyperweapon, the Godkiller.

It is known that they have visited Earth on at least four occasions (known as Hosts) during which they would alter and exterminate many of Earth's natives. They created both the Eternal and Deviant offshoots of humanity, as well as altering humanity itself. They were also responsible for sinking Lemuria underneath the Ocean when the Deviants rebelled.

They have done this on many worlds throughout the universe, experimenting with life using entire planets as petrie dishes and mercilessly pruning the life forms they deem unworthy or useless. The ultimate goal of all this remains unknown. Nevertheless, they are not entirely deaf to placation; Thor and Susan Storm have both communicated with the Celestials.

The Celestials, along with many of the Marvel Universe's abstracts, are killed by the Beyonders when these beings mount their attack on the entire multiverse. They fight the enigmatic aliens with all their power, but are almost all destroyed. In the miniature universe created by God Doom in the aftermath of the multiverse's destruction, no Celestials exist per se, but the role of the moon is filled by an orbiting Celestial head called 'Knowhere'. It is stated that the head belonged to a being who attempted to invade Doomworld, but was slain by God Doom.

After the multiverse is re-created, it is revealed a small number of Celestials had managed to evade destruction by going into hiding; however they are located and destroyed by the Logos, who declares they are no longer needed in the new universal structure. The Logos turns out to have become corrupted by the First Firmament, who seemingly finally had its ultimate revenge on the rebels; but one single Celestial, the One Above All, finds refuge with the Never Queen, the embodiment of potentiality. Since she embodies all unrealized possibilities, this allowed her to eventually accommodate the re-creation of all the Celestials from just him.

Although an amoral race of super-entities rather than true villains the Celestials have created dangerous artifacts and engaged in acts that some would consider immoral - usually to try and manipulate evolution in some fashion or to "purge" unwanted genetic codes from planets they are "progressing".

The Celestials appear in the Marvel Cinematic Universe, mostly in the Guardians of the Galaxy series, but have more recently appeared in Eternals. In the 2014 film Guardians of the Galaxy, a Celestial being known as Eson the Searcher was briefly shown using the power of an Infinity Stone to wipe out an entire planet civilization, though he would later lose the Stone afterwards. It was also revealed that a dead Celestial avatar's head was used as a mining colony before it became the space colony known as Knowhere (the home of the Collector), though it would later be destroyed by Thanos in Avengers: Infinity War.

In the 2017 sequel Guardians of the Galaxy Vol. 2, another Celestial named Ego appeared, revealing himself to be the biological father of Star-Lord. This may imply that Star-Lord is a Celestial hybrid, evident that he was able to briefly control the power of the Infinity Stone in order to destroy Ronan in the first film. However, Star-Lord soon learned that Ego himself intends to remake the universe in his own image by destroying all existence and that he was responsible for the death of Star-Lord's mother by implanting a brain tumor in her. Fortunately, Star-Lord got himself and the Guardians to foil Ego's plot by destroying Ego's core with a bomb made out of Sovereign Annulux batteries.

In Eternals, it is revealed that the Celestials were responsible for maintaining the cycle of energy that keeps the universe "alive". Arishem had existed prior to the Big Bang, when he created the first Sun. For more Celestials to spawn, entire planets filled of intelligent lifeforms would have to be destroyed in the process named "the Emergence", which requires a population quota to be reached after Arishem had planted a Celestial seed in a planet's core. He engineered the Eternals to help these civilizations advance and protect them from the Deviants, which were also one of his creations. But when a group of five Eternals empathetic towards humanity prevented the Emergence of Tiamut from taking place on Earth, Arishem abducted them for a final judgement on mankind. Jemiah, Hargen and Nezarr also appear briefly in Eternals. 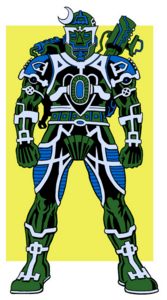 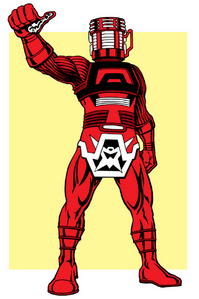 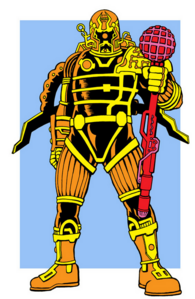 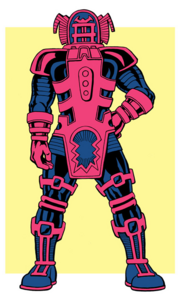 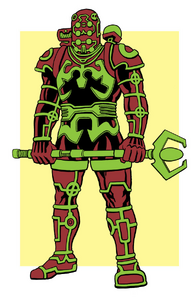 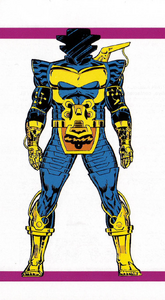 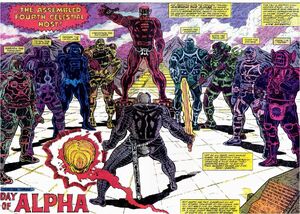 The Destroyer Armor confronting the Celestials. 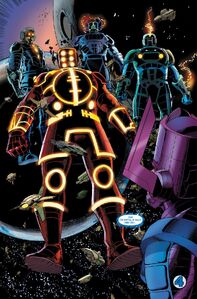 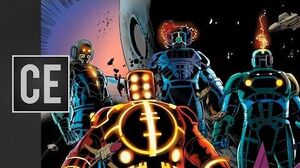 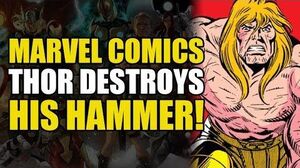 Thor's Godblast Shatters His Hammer!? (Thor vs The Celestials) 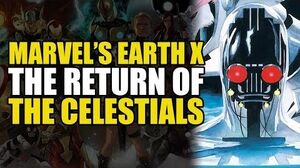 The Return of The Celestials! (Earth X Vol 5)