Retrieve his Plasmacaster.
Survive the Chiva/Trial.
Kill Grid for killing Chopper (all failed).

Celtic, along Scar and Chopper, was a Young Blood Predator sent to earth for their Chiva, in which they hunt the most dangerous game, the Xenomorphs. He is a major antagonist of Alien vs. Predator.

After Luring a band of humans to an underground pyramid, the Predator mothership discharges three young, unblooded predator warriors to complete their Chiva. It takes place in the arctic, and Celtic and his clan brothers kill many humans before they ever truly enter the pyramid. Intended to be simple cattle, the humans prove troublesome when they steal the Plasma Casters located inside the structure. The Predators trail and pick the humans off one by one to get at their weapons, even engaging them in a severely one-sided battle, until Grid sneaks onto the scene and kills Chopper when he tries to kill Alexa Woods.

Celtic hears and issues a challenging roar at the alien who just killed his brother, throwing away his human quarry to angry confront the Xenomorph. A fierce battle ensues, one Celtic looks to be winning in terms of brute strength, but the alien is able to outsmart and outmaneuver him as well as render many of his weapons useless thanks to his acidic blood. During a lull in the battle, Grid tries to sneak and kill Celtic like it did Chopper, but the predator hears and is able to capture the alien in a netgun. Feeling his victory is assured and armed with nothing but a ceremonial dagger, Celtic approaches to kill the beast, but the constrictive net is nothing to Xenomorph's highly acidic blood.

Grid gets free, tackles, and winds the predator and before he can compose himself and fight back, uses its inner jaw and busts through the predator's mask, face, and out the back of his skull, killing him.

Celtic was said to be the biggest and most aggressive of the three brothers. Before his death, he was the leader and undisputed Alpha of the trio. He had a temper and acted more rashly than his brothers, something which likely played a part in his eventual death. He was something of a bully, too, tormenting his prey while his brothers quickly and cleanly killed any human they came in contact with.

Of the three predators, Celtic was the most striking in appearance, particularly his mask which was molded around his mandibles it seems. He wore more armor than his smaller brothers and was armed with gear typical of a young, inexperienced hunter. 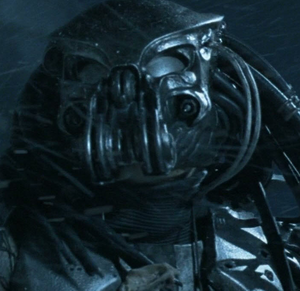 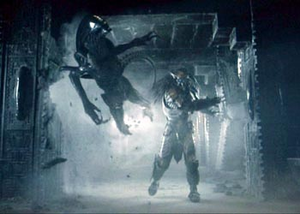