Grading his victims in how much they struggle while being killed.

Find a victim that qualifies as "A+".

Corrupt a person so that they can overpower and kill him, proving his theory that anyone can become a monster under the right circumstances

The Censor, also known as the Serial Killer and Joseph Gorski, was the 5th Elusive Target in HITMAN 2 and the main antagonist of The Serial Killer elusive target mission.

The Censor is a serial killer who grades his victims in how much they struggle while being killed. He appeared in Whittleton Creek, from October 25th - November 4th 2019.

The Censor is an alias for psychopathic serial killer obsessed with grading their victims with how much they struggle during their murder. This one was first mentioned in news report from "Another Life" mission.

During the report, it was mentioned that the highest grade the Censor ever gave to his victims was B- and the killings would likely stop once he had given an A+ though knowing The Censor this was deceit. The Censor later arrived in Whittleton Creek, hoping to find new targets for himself that had qualified his standards.

Whilst looking like a normal and generic man with some weirdly friendly demeanor, the Censor is an obsessive and sadistic psychopath who never cares about a life, being fascinated in the potential of someone struggling in their last moment as well as someone's killer instinct.

The Censor also shows an incredible elation when he discovered that there are potentially and latently dangerous people amongst every citizen of Whittleton Creek, and feels pleasure whilst torturing and killing his victims only to "grade" them.

He also appears to be a narcissist, as he subtlety boasts about his murders to other partygoers as a smug way of displaying his superiority and cunning over other people. He also becomes upset when he isn't given the nickname he wants (he'd rather be called the evaluator.) 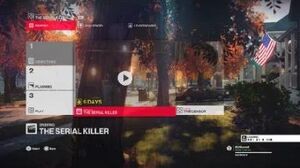