Brainwashed Robot
Centaur Man, known in Japan as Kentauros Man, is one of the eight Robot Masters from Mega Man 6. He is a centaur-themed robot who worked as a museum's tour guide.

Centaur Man is decisive, but his biggest flaw is letting past regrets haunt him. Gambling is one of Centaur Man's most favourite hobbies, although whips are not his thing.

Centaur Man resembles a centaur with a green horse body. He has green armour and has an arm cannon instead of a right hand.

When he heard about the First Annual Robot Tournament he decided to enter to help a museum he was working for, so his creator modified him for combat, equipping him with a space-distortion device which allowed Centaur Man to briefly freeze time within his area and teleport short distances. Becoming one of the eight finalists of the tournament, he was reprogrammed by Mr. X to help him conquer the world.

Centaur Man fights by teleporting around and shooting bullets out of his buster arm, causing a spread upon impact. Every now and then, he will use his Centaur Flash, which paralyzes the player for a short time. His weakness is the Knight Crusher. 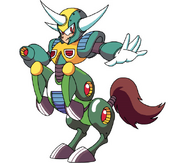