Remove the Minotaur curse that was placed upon them by the Shokan race's shamanistic magic.

The Centaurians are an evil race from the Mortal Kombat series.

Relationship with the Shokan

The Centaurians and the Shokan are bitter enemies. Both sides compete to be favored by Shao Khan, the emperor of Outworld. They have other reasons to hate each other. The Shokan were demoted during Shao Kahn's invasion of Earthrealm and the Centaurians were transformed. Despite the differences, Shao Kahn still relies on both races to serve him.

The Centaurians were always loyal to Shao Kahn, the emperor of Outworld. Instead, he favored the Shokan who were rivals of the Centaurians. The Shokan Prince maintained a winning streak in the Mortal Kombat tournament in Earthrealm. This earned his people the favor of Outworld's emperor. The Centaurians would eventually have the opportunity to earn the respect that they desired.

The Centaurians acquired the respect that they desired for many years. The Shokan lost their grace in Shao Khan's eyes. This happened when they failed to win the Mortal Kombat tournaments from Earthrealm and Outworld. As a result, Shao Kahn honored the Centaurians by favoring them as his most loyal servant. Motaro became the general of Kahn's army during their invasion of Earthrealm. Another Shokan named Sheeva was involved but she served the lesser role as bodyguard of queen Sindel. The Centaurians still held their position with Shao Kahn after the invasion ended.

The Centaurians lost their status. Goro was saved by Shao Kahn and helped him rebuild his empire. Goro's help earned the Emperor's favor of the Shokan. By using shamanistic magic, the Shokan transformed the Centaurians into minotaurs. Despite the Centaurians' transformation, they were still able to thrive.

Return to the Past

Shao Kahn won the Battle of Armeggedon. Everyone else was killed except for Raiden. He used the remains of his medallion to send a vision to himself in the past. It changed the flow of history. 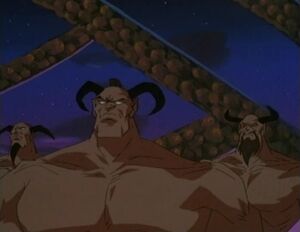 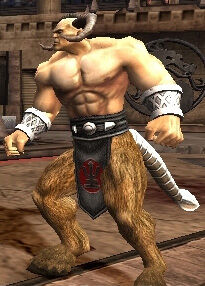 Motaro transformed into a Minotaur. 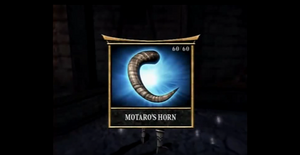