Defeating other FM-ians who attempted to kill him (formerly).

Rebuilding the Planet AM.

Cepheus is a character in the Mega Man Star Force series. He is an EM Being and the king of the FM-ians.

He was voiced by Kazusa Mura in the anime.

Before the events of the series, when the Planet FM receives signals from Earth to offering them to form a BrotherBand, translates it as attempt takes up against and wage war on Planet FM, and he begins to strike Earth.

Near the end of the game, After Mega Man defeats the final boss Andromeda, finishing the conflict among Earth and the FM-ians, Cepheus realizes what he has done, and decides to trust Geo and Earth. Cepheus at that point starts to rebuilding Planet AM alongside the three Satellite Admins.

In the extra scenario of the third game, an EM Being named Sirius guides a black hole towards the Planet FM in the hoping of devouring it for his "collection."

After Mega Man defeats Sirius and saving the Planet FM, Cepheus thanks Mega Man, reminding them they will always be Brothers.

In the anime, when the FM-ians were attacking Echo Ridge city, Cepheus accepts the BrotherBand and tells them to stop their attack on Earth and return home. Cepheus then apologizes to the humans on Earth the trouble. When Gemini Spark White tries to use the Andromeda to destroy the Earth in the climax of the season, Cepheus destroys Gemini and erased Patrick's memory of everything that happened to him while merged with Gemini. Cepheus then allows Geo to see his father, who has been converted into EM waves by Omega-Xis.

Even though Cepheus is never shown fighting in both anime and game, it is assumed that he is very powerful, as the sole influence of his power is enough to prevent the player from saving on his area. He is powerful enough to resurrect his defeated servants, which are fought in their 2nd versions, thus implying he could also make them stronger. Though after defeating Andromeda his powers are contradictory to his capacities, since Omega-Xisclaimed that without Andromeda or his servants he was done for, something that he admitted, however MegaMan was able to surpass Andromeda which indeed makes Cepheus weaker than them, but not necessarily "non powerful".

In the anime, however, he was able to defeat Gemini Spark White in an instant and wiped Patrick's memories of being with Gemini. When his appearance was revealed, he showed to be a giant, perhaps even larger than Andromeda, though this could have been merely a projection of himself. His power could be implied further to be great due to how Gemini Spark intended to conquer FM and overthrow Cepheus only after they would acquire Andromeda. He was also able to let Geo and his father speak in his mind, thus it can be implied that he has the "unique" ability to enter in the mind of people. It is also implied that he was the reason Andromeda didn't not detonate the Earth's core, despite how when Geo managed to destroy the Andromeda Key for good, Andromeda had already reached the Earth's core. Also, in the anime his sole presence was enough to break the seal on the Mu continent and with it, the new EM viruses and the UMAs as well as Solo, once more implying how powerful he truly is. 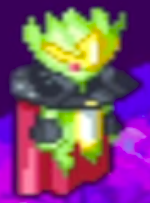 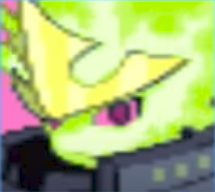 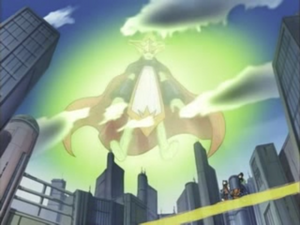 Cepheus in the anime. 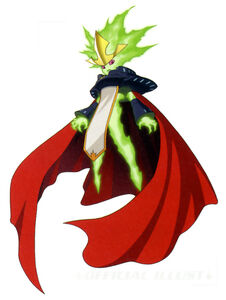 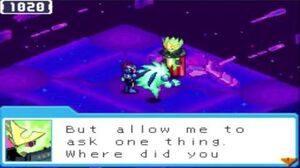