Guardian of the entrance to the Underworld

Playing with Hades.
Guarding the gateway to the Underworld.

Please his master Hades and forever guard the entryway to the Underworld.

Protective Hellhound
Cerberus in Greek mythology was the legendary huge three-headed hellhound and the guardian of the Underworld.

Cerberus was amongst the first brood of the monsters Typhon and Echidna. After the defeat of Typhon, Zeus sought out Echidna who had gone into hiding once she went into labor. Once Zeus found Echidna his hand was stayed by Hera who, as the goddess of marriage, womanhood, and birth, refused to allow Zeus to kill a mother who had just given birth, even a monster like Echidna. Zeus would spare Echidna and her monstrous children leaving them as adversaries for brave mortals to face.

Echidna in gratitude to Hera, offered her her oldest son, Cerberus, as a tribute. Hera was disgusted by the creature but knew better than to turn down such a gift or kill it outright, with Echidna as a potential ally, so instead, Hera simply gave Cerberus to her brother Hades as a gift. Hades cherished Cerberus as a beloved pet as a puppy and as he grew Hades trained Cerberus as a fearsome guard dog. In adulthood, Cerberus stood to watch over the gates of the underworld. Cerberus had standing orders to let anyone enter but none leave and was one of just many such securities of the Underworld.

The Twelfth Labor of Heracles

For Heracles (Hercules)' final labor he was asked by King Eurystheus to bring back Cerberus as proof of his strength and bravery. Heracles eventually found the entrance to the underworld and entered, but rather than attack Cerberus on sight, Heracles, who had heard many stories of Hades and how he treated intruders, ignored Cerberus and continued straight onward to Hades' palace.

Heracles went before Hades himself and asked for permission to take Cerberus. Hades was impressed by Heracles, who until then had a reputation for acting without thinking, and while all non-dead who had previously entered the underworld did so to attempt to win fame or subvert death, Heracles was the first to place respect for Hades above his own ambitions. Hades was so impressed with this that he granted Heracles permission to take Cerberus on a few conditions.

Then sheathing his weapons Heracles returned to Cerberus to wrestle him bare-handed. Cerberus was strong and fierce, it's three head biting and snarling rabidly. The two fought so fiercely that earth cracked beneath them and walls shook as they tussled passed, however, for all the fighting Heracles managed to headlock and drag Cerberus bit by bit out of the Underworld and back to Eurythmics. King Eurystheus was terrified when Heracles returned, he had not expected Heracles to return from what he believed to be a suicide mission.

The people of the kingdom ran in fear and panic as Heracles approached with the rabid beast. Cerberus chomped at all the people trying to eat them but was restrained by Heracles. Heracles casually asked where Eurystheus wanted his new trophy but was turned away by the fearful king who took cover. Heracles asked if Eurystheus was satisfied with his labor to - which Eurystheus proclaimed fervently that he was, and for Heracles to get the man-eating hell-hound out of his kingdom. Heracles escorted Cerberus all the way back to the Underworld step by step.

In retaliation to the situation, Hades privately appeared before King Eurystheus while Heracles was dragging Cerberus back. Hades demanded to know why King Eurystheus had dared to send someone into his realm to take his beloved pet as a trophy. Eurystheus collapsed in fear and begged Hades to spare him revealing to Hades that he received orders for all of Heracles' labors from Hera herself who was trying to send Heracles to his death. The tale goes that Hades visited Hera and warned her if she ever sent Heracles on any such errand again she would have to deal with him. Thus was the capture of Cerberus to be Heracles's final labor.

When Orpheus's wife Eurydice was killed by a snake, he decided to travel to the Underworld to retrieve her. After charming the boatman Charon, he encountered Cerberus. He played a beautiful tune on his lyre which lulled the snarling dog to sleep, allowing him to pass through into the Underworld.

According to Virgil's Aeneid poem, Aeneas, who had survived the battle of Troy, and would go on to found the seeds of what would become Rome encountered Cerberus in the Underworld on his adventure. With the guidance of the Cumaean Sibyl Aeneas descended into the underworld as part of a vision quest, to evade Cerberus the sibyl brought three pieces of food laced with a sedative, Cerberus ate the treats as thrown to him, the potion was not enough to put him to sleep as it would have any mortal beast but it did slow Cerberus up enough for Aeneas and the Sibyl to flee quickly passed him to speak to the ghost of Aeneas' father and complete his vision quest.

Cerberus's exact personality is not clear, as it hasn't been explored or investigated in great detail. From all the information that is revealed about him, it can be said that he is steadfast and loyal, willingly standing at the gates of the Underworld, devoted to his role as Hades' monstrous sentinel.

He also is shown to adore his master, Hades, and vice versa. Although they rarely interact, Cerberus eagerly anticipates every one of his visits. He is shown to also be affectionate to Hades' wife Persephone. One theory explains that this is due to the similarities between their positions in the Underworld. Hades kidnapped Persephone and made her his queen against her will, and Cerberus was also taken into the Underworld without a personal choice, although he wasn't kidnapped, but adopted in a way.

In other renditions of the Greek Pantheon, such as in the Percy Jackson series, Cerberus is given a more soft and light-hearted personality, as he is shown to be lonely and in need of companionship.

While some early myths account for Cerberus having one-hundred heads most myths actually refer to him as having three heads and such other accounts are widely considered non-cannon exaggerations to the established character. Each of Cerberus' heads had its own mind capable of seeing, hearing and acting independently of each other, however, all three heads were governed by a single will; This allowed Cerberus three times the perceptive capabilities of a single hound without fighting amongst himself.

The heads would sleep in shifts, ensuring Cerberus was a danger even while he slept and always felt refreshed and well rested. Cerberus is said to have a tremendous strength that could shake the ground and break walls. Cerberus was a skilled tracker that could hunt endlessly once he acquired something's scent, guaranteeing no one could hide from him.

Cerberus was a man-eater who was fed the bones of the dead by Hades but he also had a taste for the souls of the dead and though Hades ordered Cerberus to spit out spirits when caught they were still described as making his mouth water. Cerberus jaws could not only affect ghosts but snap steel spears and swords like twigs. Cerberus had speed three times faster than a traditional hunting hound, allowing him to cross great distances with ease. 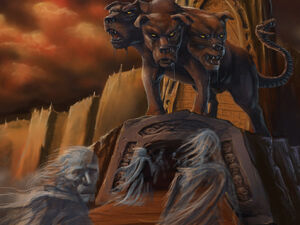 Retrieved from "https://villains.fandom.com/wiki/Cerberus_(mythology)?oldid=3922153"
Community content is available under CC-BY-SA unless otherwise noted.