Leader of the Cerberus

Sending his minions to hunt Cash.

Cerberus Leader is one of the two secondary antagonists (alongside Ramirez) in the controversial video-game Manhunt. He is Lionel Starkweather's right-hand man and the leader of the Cerberus unit.

He was voiced by Brian Maillard.

When James Earl Cash escapes from Ramirez and the rest of the antagonists, he faces the Cerberus, an elite group designed to capture Cash and protect Lionel at all costs. The SWAT arrives and tries to kill Cash, however, the Cerberus appears and kills every single SWAT member.

The Cerberus Leader appears and tasers Cash, taking him to Starkweather's estate. Cash escapes along with the psychotic Piggsy during his time in the estate, Piggsy kills some Cerberus and Cash goes after Cerberus Leader, trying to get his elevator key. After a battle in the mansion, Cerberus Leader is finally killed by Cash. 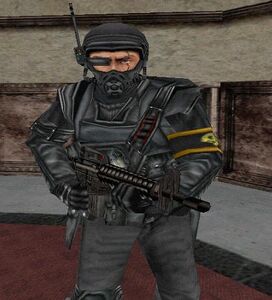