Power of the Sun.

Cereyon, also known as "Helios' Champion", is the main antagonist of the God of War Comics.

Cereyon is Helios' Champion. He doesn't make an appearance until the end of the Comic Book series.

After Kratos attempted to capture the Ambrosia, Cereyon appeared out of nowhere and attacked Kratos. He tried to burn Kratos to death and acquire the Ambrosia for himself. During the battle, most of the enviroment was destroyed.

After a great and lengthy battle, Kratos was finally able to defeat Cereyon by tackling him into a stream below them, which extinguished Cereyon's pyro kinetic powers.

Kratos processed to finish off Cereyon by drowning him to death. Kratos did substain multiple burn wounds from the initial tackle, but by acquired the Ambrosia, Kratos successfully reversing all of his burnt wounds. 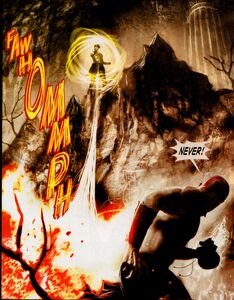 thumb|Cereyon reveals himself to Kratos. 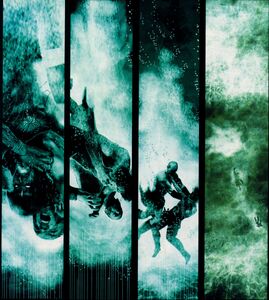 Kratos drowning Cereyon to death.
Add a photo to this gallery

Retrieved from "https://villains.fandom.com/wiki/Cereyon?oldid=2891216"
Community content is available under CC-BY-SA unless otherwise noted.